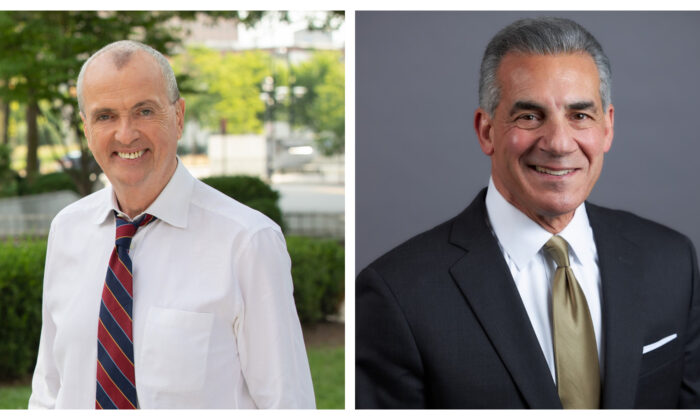 New Jersey voters will decide on Nov. 2 in the governor’s race between the Democratic incumbent, called “a progressive governor” by his supporters, and his Republican challenger, running under the slogan, “Let’s Fix New Jersey.”

Gov. Phil Murphy, who is seeking a second term, held leadership roles at Goldman Sachs’s offices in Germany and Hong Kong for more than 20 years and served as an ambassador to Germany during the Obama administration. He was also a finance chair for the Democratic National Committee.

Murphy, a Democrat, talked about his achievements as New Jersey governor on Oct. 26 on the radio program “Keepin’ it Real with Al Sharpton.”

The governor said that he’s most proud of a tax fairness initiative for middle-class families, establishing a minimum wage of $15 per hour in the state, “equal work for equal pay for millions,” and funding public education. He also listed reform to the criminal justice system, which gave voting rights in New Jersey to those who are on parole or probation, as well as allowing in-person early voting for the first time in New Jersey.

“I want to make sure we’re protecting women’s health at all costs, including a woman’s right to choose, ” Murphy told Sharpton.

In the budget address he delivered in February, Murphy talked about two measures that were enacted to ensure tax fairness: expansion of the earned income tax credit and the reinstatement of the millionaire’s tax.

The Tax Foundation—a Washington-based independent tax policy nonprofit that evaluates how well states structure their tax systems and provides a road map for improvement—ranked New Jersey’s tax system as the worst in the nation in 2021, according to a Foundation report (pdf). The state’s individual income tax system was also ranked last.

“New Jersey … is hampered by some of the highest property tax burdens in the country, has the second-highest-rate corporate and individual income taxes in the country and a particularly aggressive treatment of international income, levies an inheritance tax, and maintains some of the nation’s worst-structured individual income taxes,” the report reads.

Murphy told Sharpton that he was also proud of the legalization of adult-use of cannabis in New Jersey.

Making college more affordable was also one of the things Murphy said he was proud of.

Murphy’s administration implemented a program allowing New Jersey families with income lower than $65,000 to apply for tuition-free college if they satisfy certain eligibility criteria. However, the benefits of this program could be offset by raising tuition costs, room and board costs, and books costs, according to an NJ.com analysis.

Only New Jersey’s private religious colleges cut their tuition between 2017 and 2020, NJ.com reported. However, state Republicans said the tuition-free college program will contribute to a tax increase, which, in turn, will make it difficult for everyone to save for college and afford tuition, NJ.com reported.

However, illegal immigrants in New Jersey have been eligible to obtain state-funded financial aid to pay for college education if they satisfy certain criteria under the law, which was signed by Murphy in 2018.

Ciattarelli told The Epoch Times at a “Meet and Greet” event in Woodbridge, New Jersey, that the state currently is the worst place in the nation in which to do business.”

The state has the “highest property taxes in the nation. Our government spending is out of control in Trenton [the state’s capital]. We’re not supporting our local and state police as we should be, and our public school curriculum isn’t teaching critical life skills or providing vocational training to our students,” he said. “Those are the five areas that are very broken. I want to fix those things.

“It seems as though the people of New Jersey agree.”

To address these issues, Ciattarelli said if elected, he would “lower property taxes, create more jobs, control spending, support our local police so they can do their job to make our community safe, and change the public school curriculum.”

According to a recent study conducted by WalletHub—a personal finance and credit advisory website—New Jersey is the worst place in the nation to start a business. WalletHub ranked all states based on a variety of metrics. New Jersey also scored the lowest rank in terms of business costs, was No. 39 in terms of the business environment, and ranked 11th in terms of access to resources, according to the study.

State Sen. Steve Oroho said in a statement that a payroll tax increase imposed on employers to cover a projected deficit in the unemployment insurance fund was unnecessary.

The Murphy administration forecasted high payments in unemployment benefits in New Jersey, which would have resulted in the unemployment insurance fund running a deficit of nearly $1 billion in June. But the state unemployment fund held more than $51 million in surplus at the end of June—a billion-dollar miss, Oroho said on Oct. 28.

“The unemployment insurance tax increase [set to take effect at the end of October] was not announced until Friday, August 13. There was plenty of time for the administration to recognize that their forecast was way off and to nix any tax increase,” Oroho, a Republican, said in the statement.

Moreover, New Jersey has also borrowed nearly $4 billion and the state’s spending is up by $11 billion in less than four years’ time, Ciattarelli said during an Oct. 27 press conference in Hoboken.

Get Out to Vote

Ciattarelli encouraged people to vote and to tell others either directly or through social media to vote, too.

“Let us not wake up the morning of Nov. 3—Wednesday, Nov. 3—and find out we lost by 1,797 votes—not with what’s at stake: the future of our state,” he said, referring to former Republican New Jersey Gov. Tom Kean, who won the election by 1,797 votes out of 3 million votes cast.

“Get out, remind people what’s at stake. … Our future is at stake.”

Ciattarelli said he himself has won seven elections in New Jersey. He told the audience his story of running for town council in a mostly Democratic town where all six council seats were held by Democrats.

“On Memorial Day, I started knocking on every door. And on Labor Day, I was done. I went back and knocked on every door again. And the people of my hometown gave me the privilege of serving on that council. And three years later, I won with 88 percent of the vote,” he said.

Ciattarelli said it taught him that the hard-working, decent people of New Jersey will vote for a person who gives them a reason to vote.

Ciattarelli is undeterred about his chances, since the state hasn’t reelected a Democratic governor since Brendan Byrne in 1977,

Murphy held a campaign rally at Rutgers University in New Brunswick on Oct. 28, where he was joined by Sen. Bernie Sanders (I-Vt.).

During the rally, Murphy touted the policies he has implemented, such as tax fairness for middle-class families, minimum wage at $15 an hour, more affordable public education, more child care, environmental policies, and legalizing marijuana.

“We have come a long way but our work is not done. We have to keep moving forward, we cannot go backward,” Murphy said. “You have got to vote either by mail or early in-person voting for the next three days—or if not, on Tuesday, Nov. 2.”

Sanders, an openly socialist member of the Congressional Progressive Caucus, called Murphy “a progressive governor” and asked the audience to not only vote for Murphy, but to encourage others to vote for him as well.

“I’m asking you to bring out two or three of your friends. Let us win this election,” Sanders said at the rally.