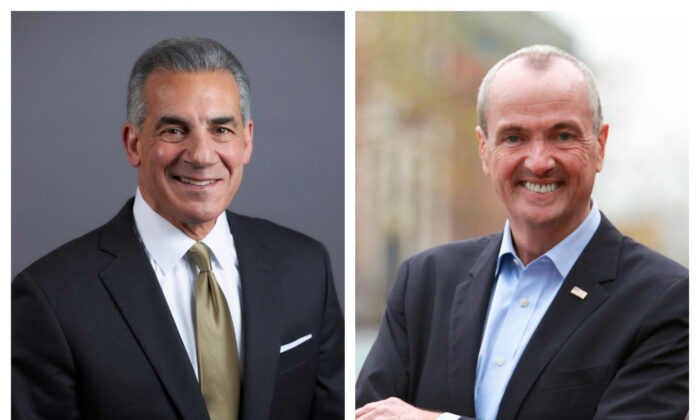 New Jersey Gov. Phil Murphy and Republican hopeful Jack Ciattarelli faced off in a contentious gubernatorial debate on a range of issues, including the response to Hurricane Ida, the COVID-19 pandemic, racial profiling, school curricula, and taxes.

Ciattarelli, a former New Jersey Assemblyman, wrote on Twitter that he was “fired up after the debate.” Ciattarelli is a certified public accountant, two-time small businessman, and a lifelong resident of New Jersey.

Murphy’s campaign said in a statement issued after the debate, “Governor Murphy demonstrated tonight that he is the only candidate in this race with the vision and values to keep New Jersey moving forward.”

Murphy, a Democrat, held leadership roles at Goldman Sachs’ offices in Germany and Hong Kong for more than 20 years and served as an ambassador to Germany during the presidency of Barack Obama. He was also a finance chair for the Democratic National Committee.

Ciattarelli criticized Murphy’s response to Hurricane Ida, which claimed 30 lives across New Jersey, saying that that the governor declared the state of emergency 13 hours later than neighboring Pennsylvania.

Murphy responded during the debate that he and his administration were monitoring the situation after the hurricane warning was issued.

“I was on the phone with countless mayors and obviously visited a lot of places,” he said, adding, “A big contrast is what we’re going to do about the environment to hopefully prevent this from happening again. My opponent [Ciattarelli] says we’re doing too much, too fast, too soon.”

“But to say, ‘too much, too soon, too fast’ on climate resiliency is not looking at the facts. The storms are coming more frequently, with more intensity,” Murphy added.

“A Tropical Storm Ida response is not about climate change—it’s about saving lives, and the delay in state of emergency is what costs lives, I believe, in New Jersey,” Ciattarelli added.

One of the moderators questioned Ciattarelli’s opposition to mask mandates in schools due to the fact that children are the least vulnerable to the CCP (Chinese Communist Party) virus, which causing COVID-19.

Ciattarelli was asked whether he would change his position on this issue in the light of recent data showing that the number of COVID-19 cases in children increased by 240 percent since July and that 30,000 children were hospitalized with COVID-19 in August.

The Republican candidate noted that the data cited are national statistics and his position is consistent with what the CDC (Centers for Disease Control and Prevention) said about the COVID-19 pandemic last year.

“If I had the chance to say it again, I would say differently, or more perfect. My position is consistent with the CDC with regard to the virus last year: children are not as susceptible to serious illness and death as adults are,” Ciattarelli said.

He explained that in New Jersey three out of four adults are vaccinated and there are not many cases of COVID-19 in children. “The Delta variant is different, and we need to be vigilant and protect our most vulnerable,” Ciattarelli said.

Murphy clarified that on the day of the debate there were 21 children in pediatric care in New Jersey and five of them were “in the emergency or the intensive care unit with COVID.”

According to a report of the American Academy of Pediatrics, new COVID-19 cases among children “remain exceptionally high.” During five consecutive weeks ending on Sept. 18 more than 200,000 new child cases of COVID-19 were added each week.

The report concluded however that “COVID-19-associated hospitalization and death is uncommon in children.”

Both gubernatorial candidates touched on the issue of mandatory vaccination.

“You can’t look for wiggle room on vaccines in ‘your body your choice.’ You can’t ignore the science as it relates to masking,” Murphy said, adding that vaccination and masking are “weapons … that will keep people healthy and alive.”

“I’m vaccinated, I promoted my vaccination, I encourage people to get vaccinated,” he said. “Do I believe that government has a right to tell people they have to take a medicine? No, I don’t.”

The government’s job is to “provide the public with all the information they need to make an informed decision,” Ciattarelli said, adding that while he would encourage people who want to wear masks to wear them, he believes that masks should not be made mandatory for children, particularly those as young as 2 years old. “That’s a parental choice,” he said.

Murphy was asked whether he considered his policy to admit patients to nursing homes regardless of their COVID-19 status while forbidding nursing homes from testing them a mistake. Around 8,000 people died in New Jersey nursing and veterans homes, accounting for a third of the state’s deaths from COVID-19.

Murphy responded that those people were residents of these long-term care or veterans’ homes and were required to be separated upon their arrival.

Ciattarelli said that nursing homes had not received any personal protection equipment or CCP virus test kits but had to take in COVID-19 patients. He also stated that nursing home operators raised concerns that it would be impossible to keep people there safe even if kept separate and therefore were granted legal immunity.

Murphy clarified that nursing homes were inspected and those that “didn’t do the right thing” were fined.

Ciattarelli was asked by a moderator how he would remedy the issue of racial profiling by New Jersey police and how he would encourage more racial diversity in the police force, which often does not match the racial composition of the population it serves.

The Republican candidate proposed three measures to address the racial issues brought up by the moderator: “Do a better job of recruiting people of color into our police ranks, … do a better job of screening those who want to go into law enforcement to make sure they’re on the right heart, mind, and soul … [and] find an easy way to get rid of bad cops.”

As an example, Ciattarelli cited a current administration directive that prevents the local police from doing community policing such as taking teenagers caught with drugs or alcohol to custody and notifying their parents.

Murphy said he funded two state trooper training classes in one fiscal year and added that transparency, accountability, and body-worn cameras are a huge step in preventing racial profiling. Murphy also sees universal background checks and other gun laws restricting concealed carry and the number of rounds allowed per magazine as an important factor in law enforcement.

Murphy pledged not to raise any taxes at any time in the next four years if he gets elected governor, justifying his raising taxes in the past by saying that he inherited an affordability crisis from the previous administration.

Ciattarelli promised  “there will be no new taxes” if he wins in November. He said he would lower property taxes and implement a new school funding formula that would provide “a flatter, more equitable distribution of state aids.” This new funding formula will not leave any student or community behind or lower the quality of education, he added.

New Jersey has the highest effective tax rate on owner-occupied property at 2.13 percent of a home’s value based on the latest data, according to Tax Foundation, a Washington-based think tank.