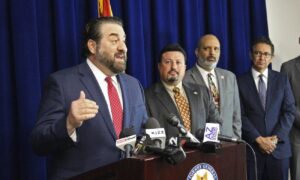 The four teens who walked into a New Jersey store they thought was open and left exact change for what they took. (Screenshot/NBC)
US

The owners of Buddy’s Small Lots in New Jersey got a call last Sunday night, saying that their shop had been broken into.

Turns out a malfunctioning lock left the front door open, and some lights were left on, giving the appearance the store was open.

Four young men walked inside and searched for a sales clerk while perusing the merchandise. And after they picked out a few things they left exact change in cash on the counter, including sales tax.

“I think it’s terrific that there are still people out there with moral character not to do the wrong thing when they easily could,” said Marci Lederman, with the store, reported NBC.

After the store’s owners saw the surveillance footage of what happened, they sought out the teens. And they found out they are football players at William Patterson High School.

One of them, Kell’E Gallimore, said he went on his laptop soon after the teens had shopped at the store and saw himself on the front page of a news website.

“I was smiling because I was, like, world famous,” he said.

Another one of the teens, Jelani Bruce, said his dad told him he’s proud of him for doing something good.

The other two teens were Anthony Biondi and Thomas James, according to NJ.com.

“We had to get to practice, because we were running a little late,” Bruce said. “So we decided to put the money on the counter instead of stealing it, because that’s just not right.”

They bought sunglasses and a pack of batteries.

Lederman later called the four back into the store and let them pick out a few things on the house for their dorm rooms.

Their coach is happy with their behavior as well.

“They represented themselves, their families and the team very well,” head football coach Jerry Flora said.