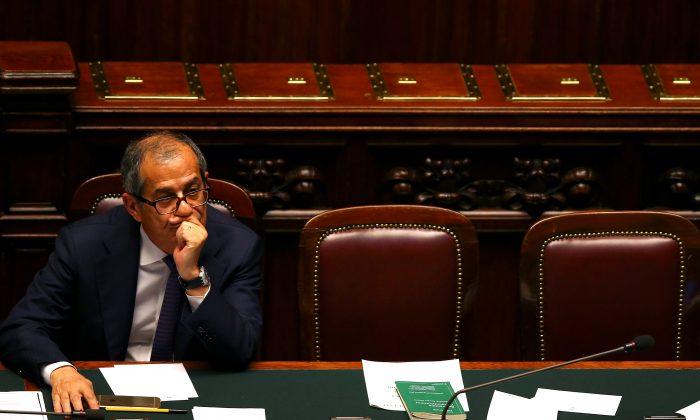 Italian government bonds have come under concerted selling pressure on fears the government will embark on a spending splurge that Italy can ill-afford and markets are wary that euro-skeptics within the coalition might try to push Italy out of the eurozone.

In his first interview since taking office a week ago, Tria told Corriere della Sera newspaper that the coalition wanted to boost growth through investment and structural reforms.

“Our goal is [to lift] growth and employment. But we do not plan on reviving growth through deficit spending,” Tria said, adding that he would present new economic forecasts and government goals in September.

“These will be fully coherent with the objective of continuing on the path of lowering the debt/GDP ratio,” he said.

“No Question of Leaving”

The government, comprising the 5-Star Movement and League, initially named as economy minister a man who had called the euro an “historic error”. He was eventually handed a less important portfolio after the head of state refused to accept his nomination.

Tria, a little-known economics professor who is not affiliated to any party, said the coalition was committed to remaining within the single currency.

“The position of the government is clear and unanimous. There is no question of leaving the euro,” he said.

“The government is determined to prevent in any way the market conditions that would lead to an exit materializing. It’s not just that we do not want to leave, we will act in such a way that the conditions do not get anywhere near to a position where they might challenge our presence in the euro.”

Tria said he had spoken to his German counterpart and was looking for “fruitful dialogue” with the European Union, adding that Italian interests chimed with those of Europe.

The new government has promised to roll back pension reform, cut taxes, and boost welfare spending, measures that are expected to cost tens of billions of euros. It also needs to find an estimated 12.5 billion euros ($14.8 billion) to stave off the threat of an automatic increase in sales taxes because of previously missed deficit targets.

However, Tria appeared cautious about initial policy moves, saying, for example, that although the pensions system needed to be improved, any changes would have to be fiscally sustainable.

He declined to say whether the coalition would hike the deficit target, but said he aimed to meet existing 2018 and 2019 debt reduction goals.

The previous center-left government had forecast a fall in debt to 130.8 percent of gross domestic product this year and 128 percent next year against 131.8 percent in 2017.

Tria urged investors to look not just at the hard figures, but also study the content of the forthcoming 2019 budget.

“As part of the debt reduction and deficit reduction goals, the budget will reflect the basic choices on how and when to implement the [government] program,” he said.

“We have a program that focuses on structural reforms and we want it to also act on the supply side, creating more favorable conditions for investment and employment.”

The government has also promised to review a recent shake-up of mutual and cooperative banks, saying the changes risked penalizing domestic lenders. However Tria said the issue “is not the first problem we have to tackle”.

He also distanced himself from calls within the coalition for the government to issue securities to pay off individuals and companies owed money by the state.

“Stop-gap solutions solve nothing,” he said.