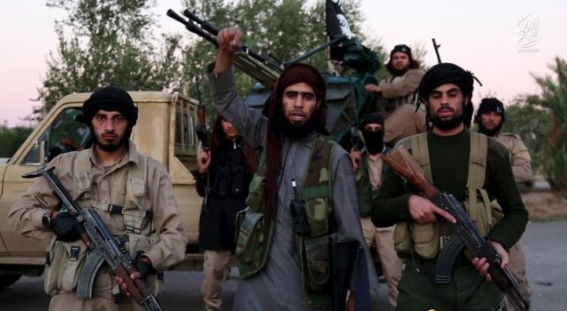 New Islamic State Video Threatens an Attack on Washington, DC: ‘We Are Coming’

Just days after 129 people were killed in attacks across Paris, ISIS released a video saying it will strike “America at its center.”

“We say to the states that take part in the crusader campaign that, by God, you will have a day, God willing, like France’s and by God, as we struck France in the center of its abode in Paris, then we swear that we will strike America at its center in Washington,” a man identified as “Al Karar the Iraqi” says in the video, according to Reuters.

The video shows militants in Iraq praising the Paris shootings and bombings. It was distributed by ISIS-related social media accounts, and was purportedly made by Wilayat Kirkuk, a group based in Iraq north of Baghdad.

The 11-minute video starts with news clips showing the aftermath of the Paris attacks, which also left hundreds wounded.

Then Al Karar appears, ranting about “crusader” nations fighting ISIS. He’s followed by another man, identified as “Al Ghareeb the Algerian,” who said that other Europeans should expect similar attacks.

“I say to the European countries that we are coming — coming with booby traps and explosives, coming with explosive belts and [gun] silencers and you will be unable to stop us because today we are much stronger than before,” he said.

ISIS claimed responsibility for the terror attacks in Paris. Most of the militants are dead after suicide bombings, but a few who are still alive have been pursued by officials.

The threat came after Republican presidential candidate Lindsey Graham warned over the weekend that “there is a 9/11 coming” if the U.S. doesn’t lead the world in a ground war against ISIS.

He told CNN that he hopes France will invoke a NATO provision that would draw its allies into a war against ISIS.

“They should. The world should be at war with ISIL,” the South Carolina senator said, using another known name of the terrorist group.

“I’m trying to protect America from another 9/11, and without American boots on the ground in Syria and Iraq, we’re gonna get hit here at home. And if you don’t understand that, you’re not ready to be commander-in-chief in my view.”