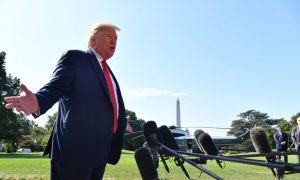 NEW YORK—New indictments are expected in the wake of accused sex trafficker Jeffrey Epstein’s death by apparent suicide, as the case shifts to focus on unnamed co-conspirators, according to criminal defense lawyers.

Two criminal defense attorneys told The Epoch Times that if the government was investigating Epstein to such a degree that they were able to make an arrest, it can be assumed that federal prosecutors in New York were also gathering evidence on those in his inner circle.

One attorney specifically mentioned the disgraced financier’s former girlfriend, British socialite Ghislaine Maxwell, who allegedly assisted Epstein in luring minors. He said Maxwell would be prosecutors’ next main target and she could potentially name others connected to the multimillionaire.

“She’s going down. She’s going to take everybody with her,” Jeffery Greco, a New York criminal defense lawyer and former prosecutor, said in a phone call. “They are going to ask her, ‘Who else did you provide these girls to?’ I think that she is going to start talking.”

Epstein often hosted parties at his Upper East Side mansion in New York City. He owned the property, which has been valued at $77 million, through an LLC. The seven-story building is located on East 71st Street, between Fifth and Madison avenues.

Nearly 2,000 pages of documents relating to Epstein were unsealed on Aug. 9, revealing allegations against a number of rich and powerful men, just a day before his apparent suicide. The court documents, from a lawsuit by one of Epstein’s accusers, Virginia Giuffre, listed new names allegedly involved in Epstein’s trafficking ring and more information on the role Maxwell played.

Greco believes the biggest implication of Epstein’s death is that there will be “more and more indictments coming down.” He said the government will be pressured to file “additional charges” against “additional people” and will be more aggressive in their methods.

“I think there is this extra pressure on the government now to really focus on these [unnamed] co-conspirators, no matter how high up because it’s become so public,” he said.

According to court documents, Epstein sexually exploited and abused dozens of minor girls at his homes in New York City and in Palm Beach, Florida, among other locations. Since his death, a slew of investigations have been opened or demanded into his death. The official autopsy result has been delayed, “pending further information at this time.”

Julie Rendelman, a New York criminal defense attorney and former homicide prosecutor, said those who helped Epstein or assisted him along the way are now going to be the “focus of the future investigations” and will be “kind of the face of the Epstein case, instead of him.”

Some of the currently unnamed co-conspirators could potentially have been cooperating with the government to get a better deal for themselves in testifying against Epstein, she said.

“I think many or some of them may have been witnesses against him [Epstein] and now, they are potentially going to be co-defendants,” Rendelman told The Epoch Times.

“One would have assumed that the feds would have gone after everybody and tried to use those that were, I guess, the ‘smaller fish’ to go after the ‘bigger fish,'” Rendelman added. “I assume they would continue to pursue potential criminal charges against any co-conspirator that was involved in the case at this point.”

Epstein, 66, was found unresponsive in his New York jail cell in the Special Housing Unit of the Metropolitan Correctional Center (MCC) and was taken to a hospital, where he was pronounced dead, according to the Federal Bureau of Prisons, which operates the Lower Manhattan jail.

On Aug. 12, federal agents, including FBI and Customs and Border Protection agents, were seen at the dock and grounds of Epstein’s private island in the U.S. Virgin Islands.

According to Greco, nothing prevents prosecutors from seeking further search warrants to prosecute Epstein, even after his death.

“If they can show a federal judge that there is potential evidence on co-conspirators that would be found at these locations, then there’s not a federal judge around who’s not going to sign that and authorize that search warrant,” he said.

Potential evidence could be destroyed by people close to Epstein if authorities don’t preserve it now, Greco said. The evidence could lead to the prosecution and conviction of other co-conspirators, he added.

Epstein’s other “luxury properties and residences around the world,” include his roughly 75-acre Little St. James Island in the U.S. Virgin Islands. Another key property was his “Zorro Ranch” in New Mexico that covers thousands of acres. Prosecutors believe that Epstein’s island home was his “primary residence” in the United States.

Criminal defense attorney Eric Michael Arnone told The Epoch Times via email that Epstein’s privacy rights to his properties died along with him.

“Anyone out there who is concerned that a damning undiscovered document may lie in as of yet unsearched property of Epstein’s can no longer hide behind the powerful Fourth Amendment right that only Epstein, or another person with a valid privacy interest … could have asserted,” he said.

According to the latest batch of unsealed documents, former President Bill Clinton had visited Epstein’s private island. Clinton flew on Epstein’s jet, infamously dubbed the “Lolita Express,” at least 26 times, according to records obtained by Fox News in 2016. In a July statement, Clinton denied ever visiting the island and said he had only traveled on the plane four times.

President Donald Trump questioned if Clinton visited the island, telling reporters on Aug. 13, “If you find that out, you’re going to know a lot.”