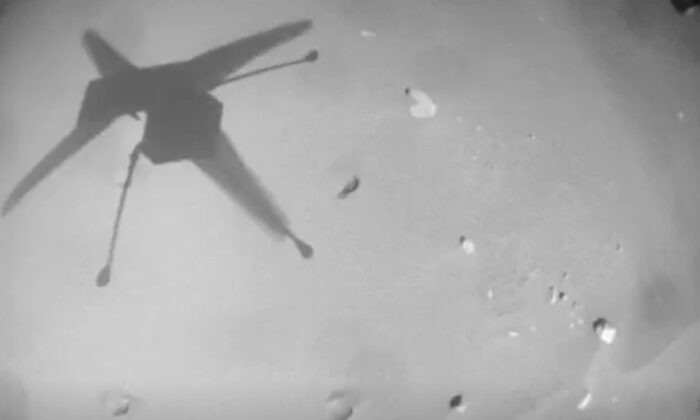 Imagery from Mars capturing its furthest and fastest flight. (Nasa/JPL-Caltech via AP/Screenshot via The Epoch Times)
Science

Imagery has come down from Mars capturing a recent flight in which the rotorcraft flew farther and faster than ever before.

Covering a distance of 2,310 feet at a speed of 12 mph, it was the Red Planet rotorcraft’s longest and fastest flight to date.

The first frame of the video clip begins about one second into the flight. After reaching an altitude of 33 feet, the helicopter heads southwest, accelerating to its maximum speed in less than three seconds.

The rotorcraft first flies over a group of sand ripples then, about halfway through the video, several rock fields.

The video of the 161.3-second flight was speeded up approximately five times, reducing it to less than 35 seconds.

Now that the rotorcraft is back in contact and getting adequate energy from its solar array to charge its six lithium-ion batteries, the team is looking forward to its next flight on Mars.