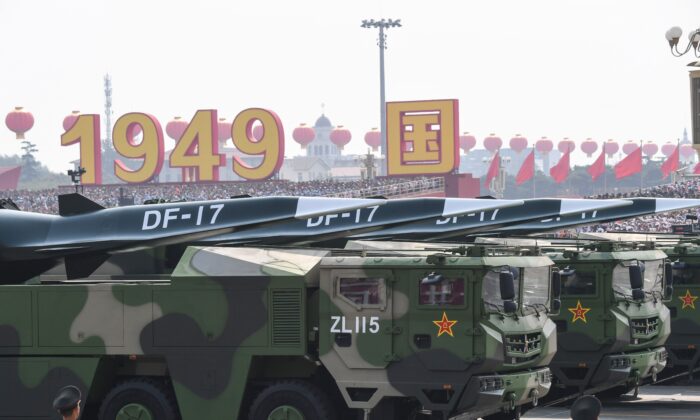 Australia, UK, and US will coordinate on electronic warfare development

AUKUS, the defense partnership of Australia, the United Kingdom, and the United States, is expanding from its original focus on nuclear submarine technology to cooperation on hypersonic and electronic warfare capabilities.

According to British officials cited in The Times of London, “Hiding key targets and the development of laser weapons that could disrupt a missile’s flight path could form part of the plans for anti-hypersonic weaponry.”

AUKUS released a statement and fact sheet on April 5, stressing that AUKUS defense cooperation is compliant with International Atomic Energy Agency (IAEA) leadership on non-proliferation and will strengthen the world’s nuclear and other weapons non-proliferation agreements.

The “nuclear” in AUKUS is for submarine propulsion, not weapons.

According to the latest AUKUS information, defense cooperation will now include the following: undersea drones planned for 2023; quantum technologies for “positioning, navigation, and timing”; artificial intelligence (AI) and autonomy that improve “the speed and precision of decision-making processes … in contested environments”; advanced cyber, “including protecting critical communications and operations systems”; and innovation, including the integration of commercial technologies for military use.

On nuclear submarines, AUKUS seeks to transfer the technology and knowledge necessary for Australia to maintain and build on these vehicles indefinitely through advanced science and technology education. This will prepare an Australian workforce with nuclear science and engineering, including “skills, training, and qualifications to build, operate, and sustain a conventionally-armed nuclear-powered submarine capability.”

Australians are already getting hands-on planning, training, and access to nuclear submarine technology, including a land-class submarine tender visit to Brisbane and Sydney: the USS Frank Cable, designed to support Los Angeles-class nuclear-powered attack submarines with weapons, repairs, and provisioning.

The new fact sheet said that AUKUS’ joint steering group teams are traveling to Australia to assist with planning for the submarines. They are baselining Australia’s “nuclear stewardship, infrastructure, workforce, and industrial capabilities and requirements.”

AUKUS meetings are already being held, and attendees include the following: the senior officials group, consisting of the three nations’ top national security advisers; the joint steering groups, which have met in Washington, London, and Canberra; and 17 working groups, nine of which are focused on the nuclear-powered submarines. The other eight address the additional advanced military technologies.

While AUKUS was originally conceived to deter China’s increasing belligerence in Asia, the Russian invasion of Ukraine also makes it essential for the defense of Europe. The United Kingdom is leading Europe in providing weapons to the Ukrainian military, for example, and so needs to improve its defenses against Russia’s hypersonic missiles.

For Australian Prime Minister Scott Morrison, the deepening AUKUS coordination raised questions from the press about whether Australia would join in a fight against China if Beijing decided to invade Taiwan. He deflected the question, saying that the new military technologies are now necessary because they are part of modern warfare.

Russia and China are currently ahead in developing hypersonic missiles, with China testing hundreds of such missiles since 2014, and Russia’s testing that started in 2018. Russia was the first to deploy the missile in combat—against Ukraine.

China successfully tested a hypersonic missile that recently flew 25,000 miles to circumnavigate the globe and fired a projectile from the missile once it arrived over the South China Sea. This seemingly insuperable technical feat surprised Pentagon officials who thought it was not yet possible.

The most recent three U.S. flight tests of hypersonic missiles have all failed.

Unfortunately, Xi Jinping and Vladimir Putin are punching above their countries’ economic weight because they can ignore voter preferences for social spending, and coerce businesses and government agencies to steal and provide dual-use technology to their defense industries.

Their leadership thrives on an aggressively militaristic approach to politics that, while alien to democracies, is nevertheless ascribed by their propaganda departments to all three AUKUS allies.

Seeing the strength, cohesion, and technological benefits of AUKUS, other countries will surely seek to join. Loyal countries that solidly support democratic values, such as Japan, should be allowed to do so.

The latest AUKUS statement offers hope for such expansion, noting, “As we mature trilateral lines of effort within these and other critical defense and security capabilities, we will seek to engage allies and close partners as appropriate.”

By increasing and strengthening AUKUS and other democratic defense alliances, perhaps including an Asian version of the NATO alliance, Russia and China can be contained, or better yet, rolled back from their territorial conquests, for example, in Ukraine, Georgia, and the South China Sea.