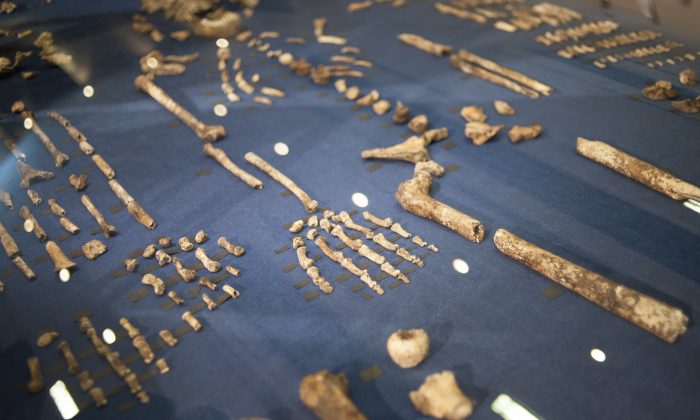 The skeleton of Homo Naledi, a newly discovered human ancestor is displayed during the unveiling of the discovery on September 10, 2015 in Maropeng. (Stefan Heunis/AFP/Getty Images)
Science

Scientists announced Thursday that they have discovered 15 human-like skeletons in the Rising Star cave system in South Africa. It is the largest assemblage of remains of a single hominin species ever found, and it is a species never before encountered.

But perhaps the strangest and most significant part of the find is that the remains were apparently carried with great effort through the narrow tunnels of the cave system to be laid to rest. This species, named Homo naledi, “perhaps thought about its own mortality and went to great risk and effort to dispose of its dead in the deep and remote chamber,” said professor Lee Berger of the University of Witwatersrand in Johannesburg in an interview with CNN.

This suggests Homo naledi had a capacity for ritual behavior. They may even have used fire to light the way to the burial chamber.

“We thought we had it figured out. We thought we knew how human origins worked,” Berger said. The more than 1,500 fossilized bones his team discovered, however, have opened a new perspective. Such behavior was thought to have emerged only about 200,000 years ago.

Berger has not yet dated the Homo naledi bones, but he told the BBC this species could have lived in Africa up to 3 million years ago.

Homo naledi had a brain no larger than an orange, hands and wrists capable of human-like manipulations, human-like feet, and long legs.

Berger’s team published their findings in the journal Elife on Thursday, Sept. 10.

Emphasizing the significance of the discovery, Berger said, “This is like opening up Tutankhamen’s tomb.”