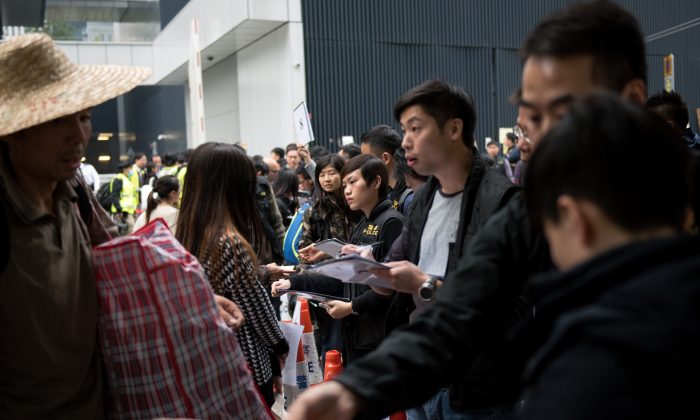 Hong Kong police (R) register people's identity cards as they are forced to leave what had been the main pro-democracy protest camp next to the central government offices in Hong Kong on December 11, 2014. (Alex Ogle/AFP/Getty Images)
Epoch China Blog

When Hongkongers get their new smart identification cards, the authorities could get a little too close for comfort.

According to a policy paper submitted to Hong Kong’s legislature on Tuesday, the government plans to replace all Hong Kong residents’ identity cards in phases between 2018 and 2020.

The new cards will feature higher resolution photo, better biometric data storage, and are harder to counterfeit. Residents will still be able to use to for a range of public services and transactions.

Apparently, the authorities will be able to access people’s data stored in their smart identity cards via RFID scanners in a 32 to 39 foot (10 to 12 meter) radius, Passion Times reports.

Passion Times, which is affiliated with pro-democratic party Civic Passion, adds that the new smart card’s RFID tech can potentially be abused by the police because they no longer have to demand that people physically hand over their cards to get their personal data. In particular, pan-democratic lawmakers, pro-democratic activists, or anyone who is deemed a security threat can be more easily monitored.

The new smart identity cards are thus a serious privacy concern in a city where stricter surveillance measures are being exercised.

Already, Hong Kong police are demanding that people show their identity cards for recording if they enter certain streets in the commercial neighborhood of Mong Kok that pro-democracy “shoppers”/demonstrators frequent.

For instance, this Christmas Day, police reportedly held casual bystanders and protesters in a segment of Tung Choi Street for up to three hours and refused to let anyone go unless police took down their identification. Eric Cheung, a member of Hong Kong’s Independent Police Complaints Commission, witnessed the event, and said afterwards that the police “have to explain and pay heed to the fact that passers-by have been dragged into this.”

In general, people are unwilling to divulge their identification to the police because the cops can then pull up particulars in the government database, keep tabs, and even make home arrests if they think it is necessary.

2018 and 2020 is still some years away, however, and there’s no huge public outcry now over the potential privacy issue the smart identification cards will cause.

Those who are thinking ahead won’t likely be losing sleep over the issue too because there are ways to deter personal data “theft” via RFID scanners.

There are RFID-proof wallets, cases, and even blazers made of RFID-blocking fabric available on the market now, unwire.hk notes.