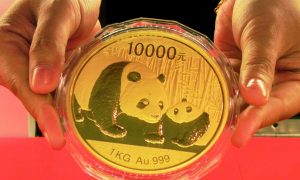 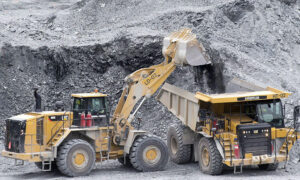 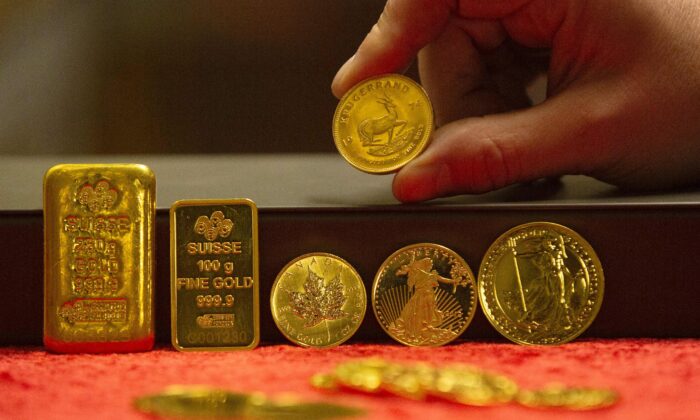 A variety of gold bullion on display at Merrion vaults in Dublin, Ireland, on Jan. 7, 2019. (Paul Faith/AFP via Getty Images)
Companies

Gold on July 27 finally broke its previous record high established in 2011. The yellow metal is up over 30 percent from its low in March, and there may be an opportunity at hand for Canada’s economy to profit while being mindful of the pandemic.

“Canada remains one of the top-ranked jurisdictions for mining investment in the world. And I think probably the way the industry has managed the pandemic is going to work in its favour,” Mining Association of Canada (MAC) president and CEO Pierre Gratton told The Epoch Times.

The MAC established a task force of members in the early days of the pandemic, and Gratton said Canada’s mining sector has seen very few COVID-19 cases relative to its global peers.

He added that miners are not yet at full production but are getting there, contingent on taking all the necessary precautions. “Costs are higher. It costs more to put in these mobile test centres and fly or bus people safely to sites,” he said.

The worst thing that could happen is being forced to close, Gratton said. “Everybody’s being very careful.”

But despite the record prices, BMO senior economist Sarah Howcroft also doesn’t expect gold companies to rapidly expand production given the hard lessons learned in the early 2000s, when many took on a lot of debt to develop marginal projects.

“Companies are more cautious this time around, and will look for sustained higher prices before committing to major capital outlays,” she told The Epoch Times.

Hitting US$2,000 an ounce is well within reach, but likely not sustainable if the economic recovery takes shape later this year and into 2021, she said.

“We continue to expect some modest pullback from current levels once the global recovery starts to gain traction,” Howcroft said.

However, other analysts, like Bank of America’s Francisco Blanch, see gold hitting US$3,000 an ounce over the next 18 months.

Boom and bust cycles in gold come and go, but Gratton is starting to see mining projects get advanced, such as Iamgold’s Côté project in Northeastern Ontario.

Canada’s mining industry could use any relative advantage as the country’s attractiveness as a destination for mining investment has waned in recent years. Only five new mining projects were submitted for environmental review in 2019—far below average levels from 2012–2014.

And Australia, for one, has benefited.

Australia is Canada’s most natural pure competitor, Gratton said. It has had more success bringing mines on stream and has roughly 700 more mining firms than Canada does.

One regulatory issue Gratton singled out is the long timelines associated with regulatory approvals, though recent improvements have been seen regarding areas used for safe deposition of mine tailings.

The industry is also in need of more infrastructure in the north.

“Anything that can be done to invest in roads, ports, and power improves significantly the economics of these projects and makes new mines possible,” Gratton said.

Furthermore, several of Canada’s larger mining companies have been bought by multi-nationals over the last 15 years. Consolidation has been a theme for the industry.

“We’ve long been home to the junior and mid-tier mining companies, and it seems like we’re really good at starting and building. But then when we get to a certain size, somebody else comes in and takes us over, and so we don’t have any of the monolithic giants that exist in the industry today, with the exception of Barrick,” Gratton said.

The feds are currently reviewing China’s state-owned Shandong Gold Mining’s takeover of struggling junior miner TMAC Resources, which operates the Doris gold mine in Nunavut’s Hope Bay and faces an uncertain future without an injection of capital. China has a ravenous appetite for gold but is also trying to grow its presence in the Arctic.

Gold’s Day in the Sun

Gold’s meteoric rise benefits from a confluence of factors including extremely low or even negative interest rates when adjusted for inflation, pandemic fear and uncertainty, and governments injecting massive amounts of stimulus into economies.

“More recently, the weakening U.S. dollar and escalating tensions between the U.S. and China have enhanced gold’s attractiveness as a safe haven,” Howcroft said.

Gold is seen as an asset that keeps its value. There is no need to worry about not getting interest on gold, while cash is earning next to no interest at all and is actually losing purchasing power given the potential for higher inflation.

Investors are thus piling into gold—which is typically a very small proportion of people’s portfolios—via exchange traded funds. However, gold’s run may top out, as consumer demand for jewelry, bars, and coins is weak and broadly offsets investment demand, according to Howcroft.

In 2018, Canada produced an estimated 183 tonnes of gold worth about $9.6 billion. This represented slightly less than 6 percent of the world’s total gold production, which made it the world’s fifth-largest producer. China was the top producer at 400 tonnes or just over 12 percent.

After the United States and European Union, China is Canada’s third-largest export market of metals and minerals. “They’re the biggest consumers of minerals and metals on the planet,” Gratton said.

The MAC has been saying the time is right for Canada to fulfill its responsibility as a dominant mining nation. The industry association also notes that Canada is among the top five countries in the global production of 15 metals and minerals—including gold.

The mining industry represents about 3.5 percent of the economy—about half the size of the oil and gas sector—and in 2018 contributed $97 billion to GDP.