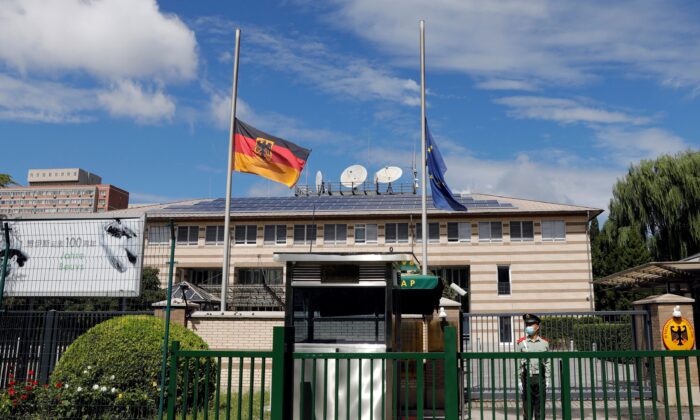 The German and European Union flags fly at half mast after German ambassador to China Jan Hecker passed away, at the Germany embassy in Beijing, China, on Sept. 6, 2021. (Carlos Garcia Rawlins/Reuters)
Thinking About China

New German Government Is Alliance Opportunity Against the CCP

Germany must walk its talk on China

Germany’s Angela Merkel is on the way out and a new government is coming—potentially the Greens, which takes a stronger stand against Beijing’s human rights abuses.

A new coalition government is expected in Germany soon and the Greens might be taking the foreign policy portfolio. This is good and bad news for those expecting a tougher stand from Germany on China’s growing power and belligerence. The Greens have a “human rights-based foreign policy” and it has often been vocal about some of Beijing’s worst abuses. But it also plans to decrease the defense budget. This means Germany will likely switch from a tight-lipped country with low defense spending, to a human rights loudmouth with even lower defense spending. The change will be six of one, half a dozen of another, and likely leave the United States and its closest allies on the China issue, including the United Kingdom and Australia, to do the heavy lifting.

On the back of late-September elections, Olaf Scholz of the Social Democratic Party (SPD) is the most likely to emerge as Germany’s next chancellor. The Social Democrats are more hawkish on China than is the outgoing Chancellor Merkel.

But Merkel’s chosen successor, Armin Laschet, the leader of the Christian Democratic Union (CDU), still has a chance. After the general vote, since there is no clear leader, those who came closest to the mark are scrambling to build a coalition of parties. This is how parliamentary systems work, which is different from the American presidential system.

As noted by Frederick Kliem in Nikkei Asia, we can expect a weaker chancellor in Germany, who changes more often, due to the new necessity for multiparty governing coalitions. “Governments will be less stable and comparatively short-lived, and the chancellery less powerful,” he wrote. The Greens, which increased their vote shares to 14.8 percent, will likely get a role in government. In exchange for their support, they could get control of foreign affairs and environmental policy.

According to Kliem, this will deemphasize the German military’s role, which, believe it or not, Merkel supported (in her small way) relative to the Greens, which wants to make Germany’s military even smaller.

“An SPD-led government, especially with the deeply pacifist Greens, is bad news for traditional supporters of the trans-Atlantic alliance who welcome a larger German security footprint globally and increased defense spending in line with Germany’s NATO commitments,” wrote Kliem. “But for those who want to see Germany take a stronger position when it comes to China—and that includes Washington—a three-party ‘traffic light’ coalition may be the best possible outcome.”

A traffic light coalition in Germany is one composed of the SPD, Free Democratic Party (FDP), and the Greens. The SPD traditional color is red, and the FDP color is yellow.

Previously, Merkel monopolized foreign policy, which was “nonchalant and taciturn” on China, according to Kliem. She was Europe’s most powerful supporter of strong EU-China ties, including support for an EU-China investment deal that was scuttled by the European Union after Beijing counter-sanctioned its lawmakers over their sanctions on Chinese officials for involvement in the Uyghur genocide.

Merkel visited China 12 times during her chancellorship, which was excessive given Beijing’s increasing human rights abuse over that period. On at least one of those trips, she tried to convince an advocate for judicial independence and other Chinese liberals and critics of Beijing that “China doesn’t seem that bad at the moment.”

Despite Merkel’s many visits with liberal intellectuals in China, which the United States and other heads of state reportedly did not mirror, China’s liberals ultimately became “disappointed by her as too much emphasis has been placed on business interests,” according to press freedom advocate Zhan Jiang, who met with Merkel twice in Beijing, and was recently quoted by the South China Morning Post (SCMP).

Merkel’s attempts to gradually improve China’s human rights, while always thirsting for more trade, proved a failing strategy. Trade won, and human rights lost through an “engagement” strategy that is better described as appeasement. Merkel’s Germany ultimately served as a powerful lever for Beijing to divide the EU.

Ding Chun, director of the Center for European Studies at Shanghai’s Fudan University, told the SCMP recently that “China was willing to meet with Merkel, even when not meeting the Brussels leaders, and now China will again observe how the EU will come up with its renewed strategy with Merkel as outgoing leader. Ultimately, China believes that the EU’s China strategy depends much on Germany.”

Merkel was also too close to China’s ally Russia, having pushed to accept its Nord Stream 2 gas pipeline, which stabs democratic Ukraine in the back and will give Russia increased leverage, in the form of dependence on scarce Russian fuel during the winter, over not only Germany, but all of Europe. Merkel played into Vladimir Putin’s hands, and by doing so, she played into the hands of Putin’s more powerful ally, Xi Jinping.

Even President Joe Biden is tougher on Xi than was Merkel, and her younger sidekick, President Emmanuel Macron of France.

According to the SCMP, “Xi spoke by video call with two European leaders—outgoing German Chancellor Angela Merkel and France’s President Emmanuel Macron—twice this year, with all expressing hopes to ‘increase cooperation’ and ‘expand the EU-Chinese relationship,’ according to the Chinese readouts from the calls.”

Both leading European countries are too busy tending their growing and lucrative trade with China to notice, let alone react effectively against the growing threat from the Chinese Communist Party (CCP). This threat is not only against China’s own citizens, but includes a growing risk of military invasion against Taiwan, which could pull the United States and its allies into war.

Yet Merkel and Macron, along with many leading EU politicians, have been so desperate for trade and more recently so impossibly hopeful that the Meng-Two Michaels prisoner-hostage exchange is a break in the dam of Sino-U.S. tensions, that Xi is now snubbing them all by delegating further talks to his deputy, Premier Li Keqiang.

That has the Europeans confused, because they don’t yet understand that Xi sees them all as unruly subordinates to whom he should not give the plum of a public meeting. He will only truly come to the negotiating table when forced by greater alliance cohesion and tougher economic sanctions against the CCP’s human rights abuses.

Even Germans have been critical of Merkel’s failure to call out Beijing on human rights issues. That failure is in part what opened up an opportunity for the Greens. The Greens are more vocal against the CCP’s abuses and are also adamant about decreasing global emissions. But the Germans have little bargaining leverage against China because they do not more actively support unified alliance sanctions, so they will only be able to decrease emissions through inflicting economic damage on themselves, further weakening their economic, and therefore military, competitiveness against Beijing.

A possible new German foreign minister is Greens co-leader Annalena Baerbock, who would then be able to assert a Green foreign policy, which includes identification of Beijing as a systemic rival.

The FDP also advocates taking a stronger stand against both China and Russia. It has advocated support for Hong Kong’s democracy movement and improved ties with Taiwan. The FDP argues that Taiwan is a “successful democratic counterpart to the PRC [People’s Republic of China],” which hits the nail on the head.

Beijing sees Taiwan as a threat because it proves beyond doubt that mainland China has a democratic alternative that is more successful economically, when considering the island democracy’s much higher GDP per capita. The success of Taiwan could at some point lead the Chinese people to wake up and remove their authoritarian leaders for something much wealthier and more democratic.

“In the light of the center left’s pacifist base, Germany will not become a hawkish balancer of Chinese power,” wrote Kliem. “But a traffic light coalition government has an opportunity to align closer with Germany’s partners and work toward a united trans-Atlantic position on the challenges posed by Beijing,” including through accepting more economic risk.

One of the most important foreign policy tools to rein in the CCP’s power will be economic sanctions, and these only have a chance if the world’s two biggest economies by GDP, the United States and European Union, take joint and concerted action. If only the United States imposes sanctions on China, then China can simply shift its trade to Europe, not to mention the rest of the world.

The shifting political landscape in Germany provides an opportunity to bring the country, and the EU, onside against the CCP. As soon as the government is chosen, Biden must redouble his efforts to bring Germany and France into a closer alliance system that includes Australia, the United Kingdom, Japan, and India.

And the pacifist German public must realize that pacifism fails against aggressive dictators like Xi Jinping. There’s no time to lose in being not only more vocal about the CCP’s human rights abuses, but more vigilant in achieving peace through strength, and a credible military deterrent against one of the world’s biggest risks to peace and security: a Chinese military invasion of Taiwan.