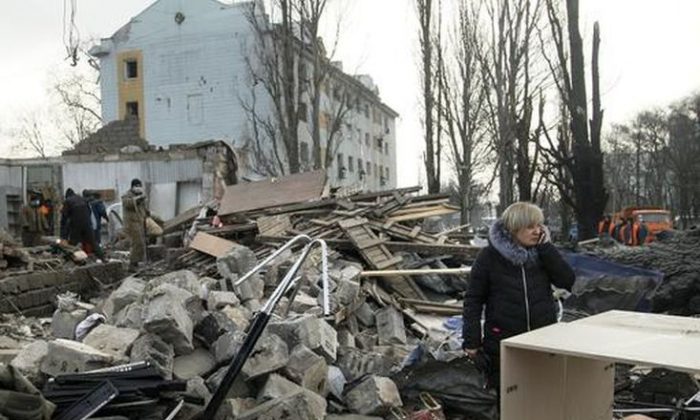 A woman speaks on her cell phone amonst the ruins of a building after shelling in Donetsk, eastern Ukraine, Friday, Feb. 3, 2017. Heavy shelling hit both government- and rebel-controlled areas of eastern Ukraine as fighting continues Friday, and international monitors issued a sharp call for the sides to still their guns. (AP Photo/Alexander Ermochenko)
Europe

At least 33 people including civilians have been killed and several dozen injured in fighting this week in eastern Ukraine between government forces and Russia-backed separatist rebels—the worst violence in the region since 2015, AP reported.

The death toll in the fighting that began in April 2014 has now exceeded 9,800, according to U.N. figures and a tally of recent fighting.

“Unacceptable! … Sides have to stop fighting!” the monitoring mission of the Organization for Security and Cooperation In Europe said on its Facebook page.

“The United States continues to condemn and call for an immediate end to the Russian occupation of Crimea,” said Nikki Haley, President Donald Trump’s envoy. “Crimea is a part of Ukraine. Our Crimea-related sanctions will remain in place until Russia returns control over the peninsula to Ukraine.”

Ukrainian President Petro Poroshenko has cast the outburst of fighting as an argument for continuing Western sanctions imposed on Moscow for its actions in Ukraine. New U.S. President Trump’s repeated promises to improve relations with Russia have fueled concern in Ukraine that Washington would back off on some of the sanctions.

The upsurge in hostilities around Avdiivka coincided with last weekend’s phone conversation between Trump and Russian President Vladimir Putin, their first since Trump took office. Putin on Thursday accused the Ukrainian leadership of ordering the attack in the east to pose as a victim to secure U.S. and EU support and prevent a thaw in Russia-West relations.

Moscow has denied any responsibility for the surge in fighting.

“The Ukrainian leadership today needs money, and the best way to extort money is from the European Union, from certain countries in Europe, from the United States and international institutions, presenting itself as a victim of aggression,” Russian President Vladimir Putin said at a press conference in Budapest Thursday.

Putin claimed that Ukraine is playing the victim card in the fracas, accusing them of trying to get aid from the U.S. and Europe.