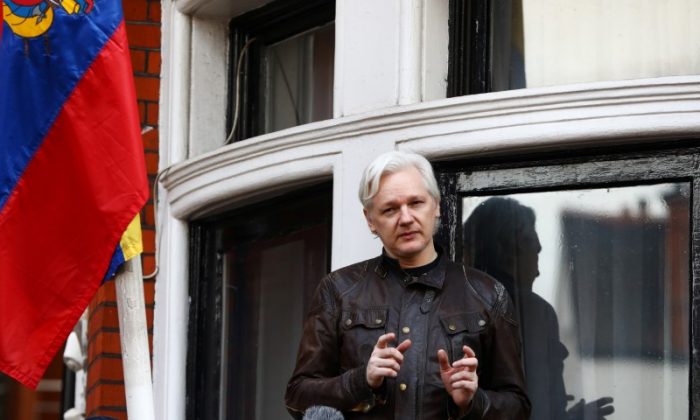 WikiLeaks founder Julian Assange speaks on the balcony of the Embassy of Ecuador in London, Britain on May 19, 2017. (REUTERS/Neil Hall)
International

New Ecuador President Says Assange a ‘Hacker,’ but Can Stay at Embassy

QUITO—Ecuador’s new leftist president Lenin Moreno said on Monday Julian Assange is a “hacker,” making his strongest comments to date against the WikiLeaks founder while still stressing he could stay on in the country’s London embassy.

Moreno, who was sworn in earlier this month, has broken with his predecessor and mentor Rafael Correa, who had said Assange was a “journalist” and granted him asylum in London in 2012 to avoid extradition to Sweden over rape allegations.

Assange, who denies the allegations, feared Sweden would hand him over to the United States to face prosecution over WikiLeaks’ publication of thousands of classified military and diplomatic documents in one of the largest information leaks in U.S. history.

During the campaign, Moreno had already taken a tougher stance on Assange, warning him “not to intervene in the politics” of countries friendly to Ecuador.

“Mr. Assange is a hacker. That’s something we reject, and I personally reject,” Moreno told journalists on Monday.

Assange dodged an eviction order in Ecuador’s April election, after the conservative candidate who had vowed to kick him out of the embassy lost to Moreno.

Still, the tight presidential election highlighted just how vulnerable Assange is should a new government be ushered in.

In May, Swedish prosecutors dropped their investigation into the rape allegations but British police said Assange would still be arrested if he left the Ecuadorean embassy where he has been holed up for five years.