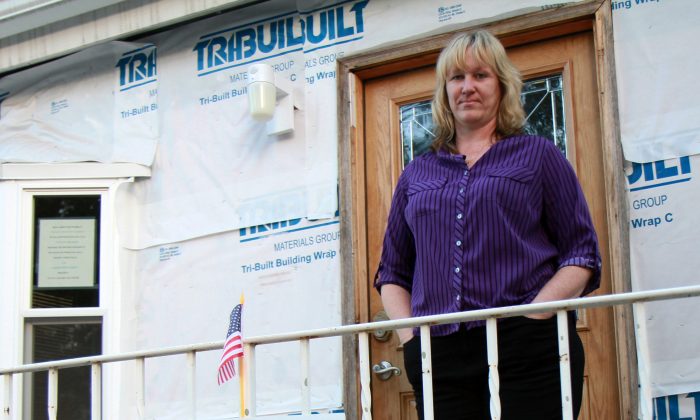 New Dorp Beach, Where Staying is as Hard as Leaving

She cleared out 25 trash bags of debris from her driveway and front porch. She surveyed the heritage trunk her grandmother passed on to her, smitten to discover her childhood memorabilia was ruined. She recovered the shampoo bottles from the back of the house.

In the months that followed, Young-McGrath became a staunch advocate for recovery in the neighborhood. She pressed local officials to clean out and reface the abandoned homes in the area as they festered with mold. She spoke to droves of journalists about the plague of problems surrounding the derelict houses: vandals, rats, mosquitoes, and noxious smells released by the mold. She was ready to start a class-action suit against the city and hire a star lawyer to spearhead the case.

One year after Sandy hit, mold is no longer an issue in her immediate neighborhood. All but a handful of the uninhabited houses have neat siding and inspection certificates posted on front doors. Many are already decorated for Halloween. But for Young-McGrath, who didn’t consider leaving as an option before, the problem is whether she can afford to stay in the neighborhood to begin with.

Young-McGrath and her husband invested more than $600,000 to purchase, renovate, and rebuild their home. They now face the steep costs of elevating it to meet new building code requirements. In addition, the menacing prospect of paying up to $20,000 more per year for mandatory flood insurance is no relief.

Young-McGrath, her husband, and daughter all work for Con Edison. Young-McGrath is a manager, while her husband is an inspector. Their family income is too high to be eligible for any aid. But it is also becoming too low for them to shoulder the increasing costs of staying in New Dorp.

“All you see on the news is how this person got help from this company. They’re wonderful to people who aren’t middle class. But [for] the middle class, which is what this neighborhood is really made up [of] … nobody is qualified for anything,” Young-McGrath said.

Young-McGrath—the one whose “We Are Staying” signs are sprinkled throughout the neighborhood and displayed on her porch—is now ready to pick up and start over. But her husband, Scott McGrath, believes leaving might be more difficult than staying. If the family decides to start anew, their home’s selling price would be about one-quarter of what they invested. Meanwhile, buying a new home elsewhere, Scott McGrath said, is like digging themselves into a deeper hole.

The only aid Young-McGrath received was $375 from the Federal Emergency Management Agency (FEMA) to replace a generator that was destroyed by the flood.

The family was eligible for a disaster assistance loan. The only catch is that they would have to pay FEMA $375 back for the generator it covered.

“This happened in Hurricane Katrina. The government knows what it did then. They know what worked and what didn’t work,” Young-McGrath said. “Why isn’t there some kind of program?”