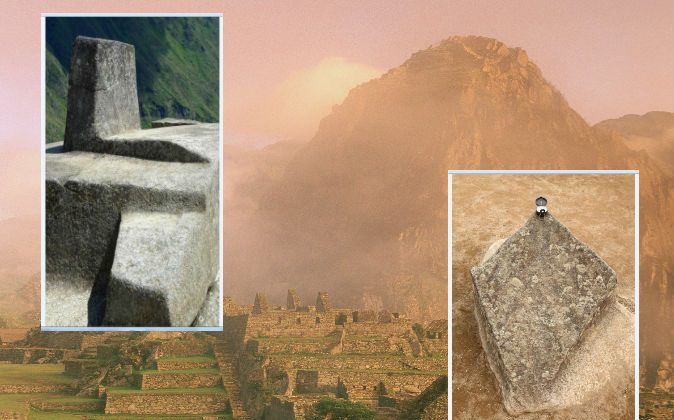 Background: The Incan ruins of Machu Picchu in Peru. Left: The Intihuatana stone at Machu Picchu, the name of which means "Hitching post of the sun," is a precise indicator of the equinoxes and other celestial periods, according to Florida International University. Right: A stone at Machu Picchu that points south and is said to represent the Southern Cross constellation. (All images via Thinkstock)
archaeology

A Polish-Peruvian archaeological team has confirmed what has been suspected for many centuries – the Incas used the ancient city of Machu Picchu as a mountaintop observatory. Although astronomical observation points at Machu Picchu were recorded in the chronicles of Sarmiento de Gamboa from as early as 1572, science is only just catching up as it is the first time astronomical alignments have been confirmed using high-tech technology, according to a report in Peru This Week.

Located in the Cusco region of Peru at 2,400m above sea level, lie the ruins of Machu Picchu, which were rediscovered in 1911 by the American explorer Hiram Bingham. An old Incan trail leads its way through the mountains of the Andes to the ancient city, which is comprised of more than 200 buildings, temples, houses, pathways, fountains and altars all cut from grey granite from the mountain top.

It has long been known that astronomy played a central role in the culture, religion, and daily lives of the Inca, who used astronomical events to govern ceremonial occasions and for planning agricultural activities. The city of Cuzco, for example, was constructed in such a way that it would replicate the sky and point to specific astronomical bodies. Pleiades was one of the important constellations of the Incas who called it ‘the Seven Kids’, after the seven brightest stars in the cluster, and the rising of the Pleiades star cluster signalled the start of the Incan year. The Incas are known to have built observatories in many different places where they captured the first and last rays of the Sun through a series of specially placed windows. Their chief observatory was called the Coricancha (Qurikancha) or ‘golden enclosure’, and was completely covered in gold (inside and outside), revealing their dedication to the Sun God.

Giving this knowledge, it should not be surprising that the famed Machu Picchu, also known as the ‘Lost City of the Incas’, also functioned as a mountaintop observatory from which the Incas observed the heavens. This fact was observed nearly five centuries ago by Spanish explorer Sarmiento de Gamboa who noticed a wall with two trapezoidal niches, each with a hole about five inches in diameter. He wrote:

Now, finally, science is beginning to catch up as it has, for the first time, confirmed that these architectural features at Machu Picchu were designed with the cosmos in mind. New research, headed up by the Universities of Warsaw and Wroclaw in Poland, used 3D laser scanning software to analyze the structures and compare their shape and placement with the positions of the stars as would have been seen by the Incas.

The investigators looked specifically at the Intimachay area of Machu Picchu, which contains a structure with a front and side window, and the Inkaraqay area, located on Huayna Picchu, both of which were confirmed as observatories used to track summer and winter solstices and the movement of the moon in a cycle of about 19 years.  Mariusz Ziolkowski from the University of Warsaw said the Inca ancestors built and used precise instruments to observe celestial phenomena at these two observatories.

Director of the National Archaeological Park of Machu Picchu, Fernando Astete, noted that these findings are important to know how advanced the Incas were in their knowledge of astronomy and noted that investigations will be continuing. The next stop will be to explore the summit of the mountain for solar markers to further corroborate the existence of astronomical observatories. While the findings are unsurprising, it is good to finally see some recognition of the advanced knowledge of the cosmos possessed by the Inca at Machu Picchu.