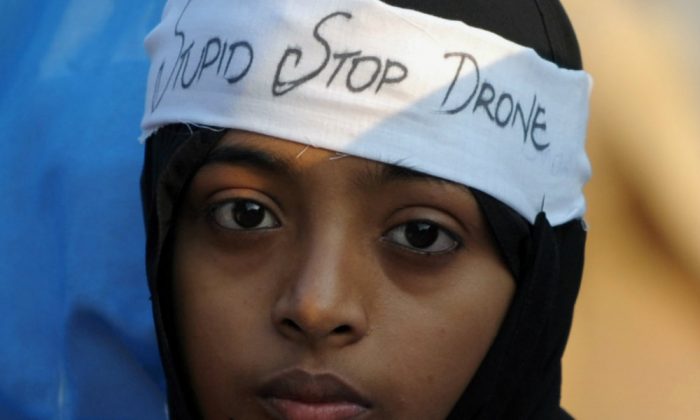 An activist of Pakistan Jamaat-e-Islami party takes part of a protest rally in Karachi on November 24, 2013, against US drone strikes. (Rizwan Tabassum/AFP/Getty Images)
Asia & Pacific

The US’s program of drone strikes in Pakistan has, according to recent reports, slowed down considerably. But while this will encourage various observers, and while the Obama administration earned some praise for committing to more transparency and accountability in its drone operations, it is still covertly conducting lethal attacks abroad (in Yemen, for instance) – and official details on what it has done in Pakistan are still anything but forthcoming.

Some light has been shed on how the drone program works; in October 2013, the Washington Post revealed how the NSA is also involved in the targeted killing program. And early in 2014, The Intercept published more details about how “controversial metadata analysis and cell-phone tracking technologies” used by the NSA for its surveillance programs are also used to identify drone targets.

But despite these efforts, the US’s continued failure to live up to its own transparency commitments makes it difficult to measure the true toll of its drone strikes in Pakistan – and particularly the number of civilian victims.

To shed light on this heavy humanitarian cost, the Bureau of Investigative Journalism (BIJ) has gathered ten years’ worth of data about US drone strikes in Pakistan, providing at last a picture of the types of targets attacked by the CIA in the country.

The BIJ was able to disclose details on the types of building involved in the attacks, the numbers of missiles used and people killed or injured. All the data are available in a dataset here.

As of May 2014, the bureau’s report has identified 383 CIA drone strikes in Pakistan, counting at least 2,296 people killed – including 416 civilians.

According to the BIJ data, 61% of all attacked buildings were domestic ones, 120 of which were completely destroyed. At least 1,500 people were killed in strikes against domestic buildings and at least 222 civilians are estimated to have lost their lives in such attacks.

The attack which took place in Chenegai, Bajaur, on October 30 2006 is reported as a “particularly bloody strike”. On that occasion, a religious school was hit; 81 people were reportedly killed.

Besides being the most targeted type of buildings, domestic buildings are significant for another reason: in Afghanistan, strikes against domestic houses have been banned since 2008, in order to avoid civilian deaths. The International Security Assistance Force (ISAF) released a Tactical Directive, leaked to the press in 2013, designed to prevent innocent killings. It stated that all “compounds” have to be considered “civilian” unless “proven to be clear”.

But despite this attempt to limit attacks against domestic buildings in Afghanistan, the BIJ reports that the CIA has still “consistently attacked houses” in Pakistan.

The term “compound” itself deserves scrutiny. People who live in Afghanistan and tribal areas of Pakistan do actually live in structures “often described as compounds”. But in most of the cases, these buildings are real domestic houses, “often rented or commandeered by militant groups”.

Conducting their research, BIJ reporters Alice K Ross and Jack Serle underlined a deterioration in transparency over the last 18 months of attacks. In reports from these strikes, targets and victims “have almost completely vanished”, together with the reporting of civilian deaths, despite the apparently growing number of strikes targeting houses.

According to their report, Mansur Mahsud, director of the Pakistani Fata Research Center, attributed this to “changes in behaviour on the ground”: sympathetic locals used to host militants in their homes, but “the threat of drone strikes means that now, when militants come to stay, civilians usually leave”.

Also under scrutiny in the BIJ report is the timing of strikes. According to the data, houses were twice as likely to be attacked at night as in the afternoon – and attacks conducted during the evening, with more people likely to be at home, were clearly more deadly. Vehicles were also targets of drones strikes, but were mostly attacked in the afternoon and strikes on them involved fewer civilians.

The BIJ gathered data about the strikes from different sources. This process involved media sources and, among others, information gathered on the ground, prior research, evidence from legal cases, and leaked documents such as the WikiLeaks cables database.

It is important to note, as the BIJ points it out, that in the case of Pakistan, the CIA is not revealing information and is not commenting on its drone program. The authorities in Islamabad, meanwhile, don’t publish a casualty count.

The report on drone casualties in Pakistan is part of a broader protect the BIJ is conducting on the “Covert Drone War” underway not just in the AfPak arena, but also in Yemen and Somalia.

In early 2013, the BIJ also launched a project called “Naming the Dead” to seek more transparency in US drone activities. And besides its efforts in data gathering and analysis, the Bureau is also working with using data visualisation to map all the mentioned strikes. To that end, together with its partners Forensic Architecture and Situ Research, the BIJ has created an interactive online map – available here – that provides some context for the Pakistan report.

Ron Wyden, a US senator from Oregon, famously decried the Obama administration’s targeted killings of American citizens abroad with the statement that “every American has the right to know when their government believes that it is allowed to kill them.”

In that spirit, now that the killing of Pakistani targets outside of international law appears to have slowed, the BIJ’s work to expose them may at least extend some posthumous recognition to the US’s civilian victims.

Philip Di Salvo is a PhD candidate in Communication Sciences at the Università della Svizzera italiana, Switzerland. He works for the European Journalism Observatory as web editor. As a journalist, he writes for the Italian Wired magazine. Di Salvo does not work for, consult to, own shares in or receive funding from any company or organisation that would benefit from this article, and has no relevant affiliations. This article was originally published on The Conversation. Read the original article.