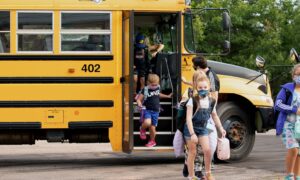 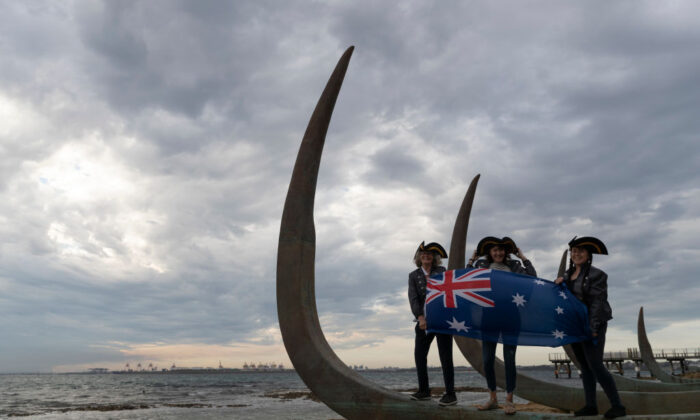 Three women wave the Australian flag at a new installation at the site Lieutenant James Cook is believed to have first stepped ashore on April 29, 2020 in Sydney, Australia. (Brook Mitchell/Getty Images)
Australia

The Australian national curriculum draft continues to attract criticism for its changes to history and civics, which has removed references to Australia’s democratic and Christian heritage and increased the amount of content relating to the perspectives of Aboriginal Australians.

Jacinta Collins, the executive director of the National Catholic Education, said the Catholic sector supported the review’s intent to produce a curriculum that “focuses on essential knowledge and skills.”

She referred to the Alice Springs (Mparntwe) Education Declaration (pdf), which highlighted the important role education has in the development of young Australians, including spirituality, and believed the new curriculum should adopt that approach.

“Humanities is richly connected to Christian faith and morals through art, music, literature, history, philosophy, etc., and this should remain a vital part of the national curriculum,” Collins said.

Nick Carter, executive director of the Menzies Research Centre, wrote an op-ed in The Australian harshly criticising the “airbrushing” of Western culture from the national curriculum.

“Every trace of the Judeo-Christian tradition has been expunged,” Carter wrote. “The concept of liberalism, Australia’s defining principle since 1788, appears not at all.”

He said that the “glaring omissions” of these concepts and references explains why the civics syllabus failed to contextualise Australian values or recognise their importance properly.

Carter also said he believed the draft did little to declutter and help teachers navigate the current curriculum—one aspect of what the review originally sought to do.

“This pained effort to be inclusive means the curriculum hesitates to prioritise anything at all,” Carter said.

An example of how the draft fails to prioritise content properly is the inclusion of indigenous maths into the curriculum, where children will learn how Aboriginal cultures calculated.

Indigenous education academic at the Australian Catholic University Anthony Dillon told 3AW radio that he did not even know what Aboriginal maths was but welcomed the greater focus on Aboriginal history.

“Keep it in the history class for a start,” Dillion said. “Teach on those things that we can agree, like the dates that the British arrived, and encourage students to do their own research. Have them look at both sides of the argument.”

Indigenous leader Warren Mundine said he had concerns that the new curriculum reflected the “dumbing down” of the education system, adding that the authors were trying to insert “critical race theory” into the classroom.

He also criticised the use of the term “First Nations” to describe Aboriginal communities, saying it was a term from Canada and had little relation to Australia.