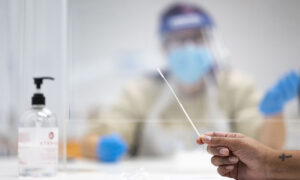 He said that “urgent work is underway” to make sure it doesn’t affect the mortality rate.

“As announced on Monday, the UK has identified a new variant of COVID-19 through Public Health England’s [(PHE)] genomic surveillance,” Whitty said in a statement.

“As a result of the rapid spread of the new variant, preliminary modelling data and rapidly rising incidence rates in the South East, the New and Emerging Respiratory Virus Threats Advisory Group (NERVTAG) now consider that the new strain can spread more quickly.”

Whitty said the UK had alerted the World Health Organisation and is continuing to analyse the available data.

“There is no current evidence to suggest the new strain causes a higher mortality rate or that it affects vaccines and treatments although urgent work is underway to confirm this,” he added.

Whitty’s statement was published as Prime Minister Boris Johnson and his senior ministers discuss actions needed in light of the new development in an urgent cabinet meeting.

The PM will hold a briefing with Whitty and his Chief Scientific Adviser Patrick Vallance at 4 p.m. to address the nation.

Johnson said on Friday that he was “hoping very much” to avoid another national lockdown, but didn’t rule out the possibility.

He and his ministers have spent the last few days urging people not to take full advantage of the relaxation of the  CCP (Chinese Communist Party) virus restrictions over the Christmas period, which were agreed to last month by the UK government and the devolved administrations of Scotland, Wales, and Northern Ireland.

PHE said on Monday that the new variant, named “VUI—202012/01,” could be more infectious and can spread more easily because of a mutation in the virus’ spike protein.

The mutation is in “a region referred to as the receptor binding motif (RBM) of the Spike protein,” according to the COVID-19 Genomics UK (COG-UK) Consortium, which randomly sequences about 10 percent of UK’s positive samples of the CCP virus, and produces a weekly report for PHE.

COG-UK said the RBM is responsible for viral entry via its interaction with the receptor (hACE2) on host cells.

As of Dec. 13, “1,108 cases with this variant have been identified, predominantly in the South and East of England,” PHE said in a statement.