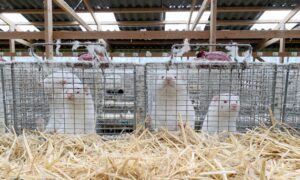 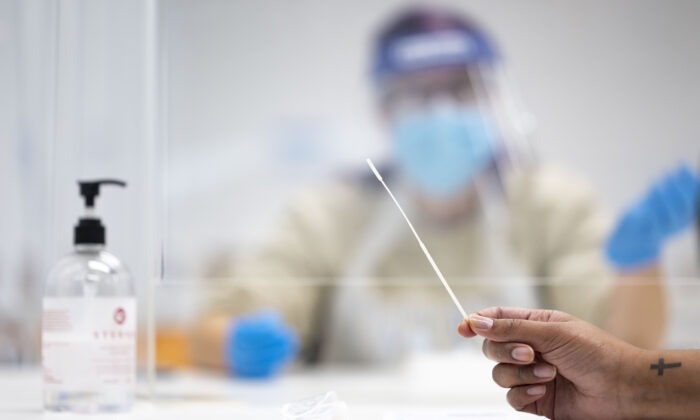 A student holds a swab which is part of a lateral flow test at Swansea University in Swansea, Wales, on Dec. 8, 2020 . (Matthew Horwood/Getty Images)
PUBLIC HEALTH INFORMATION

The new variant of the CCP virus observed in England includes a mutation in the spike protein, which can potentially make the virus more infectious and spread more easily, Public Health England (PHE) said on Monday.

The mutation is in “a region referred to as the receptor binding motif (RBM) of the Spike protein,” according to the COVID-19 Genomics UK (COG-UK) Consortium, which randomly sequences about 10 percent of UK’s positive samples of the CCP (Chinese Communist Party) virus, and produces weekly report for PHE.

COG-UK said the RBM is responsible for viral entry via its interaction with the receptor (hACE2) on host cells.

PHE and its partners, including COG-UK, are investigating the new variant and they expect to share their findings over the next two weeks.

The UK’s Health Secretary Matt Hancock on Monday announced the discovery of the new variant, which had been named “VUI—202012/01.”

As of Sunday, “1,108 cases with this variant have been identified, predominantly in the South and East of England,” PHE said in a statement.

According to PHE, there is currently no evidence to suggest that the new variant has any impact on disease severity, antibody response, or vaccine efficacy.

“So far, there is no evidence that the symptoms are any worse or different from other variants of this coronavirus,” Chris Whitty, Chief Medical Officer for England, said during a press conference on Monday.

“There are many variants. It just happens that this one has quite a few more mutations than some of the other variants,” he added.

“So that’s the reason why we’ve taken it more particularly seriously, but there’s nothing to suggest that the symptoms are different, that the testing is different, or that the clinical outcome is different for this variant.”

The main question, Whitty said, is whether it causes the virus to spread faster.

PHE observed an association of higher CCP virus case numbers and a higher number of cases with the new variant, but it is too early to tell whether the variant contributed to the increase in case numbers.

The CCP virus has been “evolving and mutating all the time, as do all similar viruses,” Professor Tom Solomon from the University of Liverpool said.

According to COG-UK, “many thousands of mutations have already arisen” in the CCP virus genome since it emerged in 2019, including around 4,000 mutations in the spike protein gene at the present time.