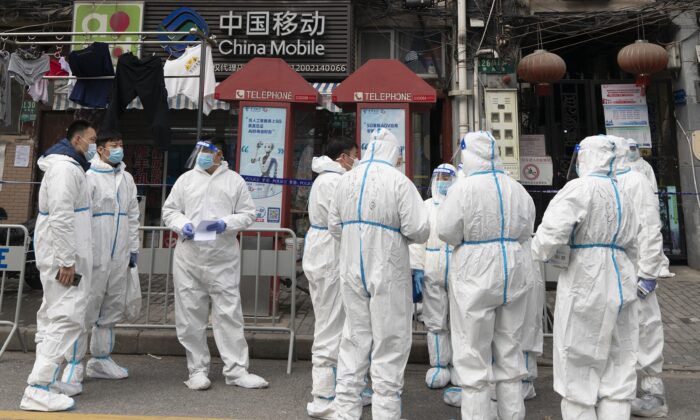 Health workers are seen in the Huangpu district in Shanghai on Jan. 28, 2021. (Hu Chengwei/Getty Images)
INSIDE CHINA

A COVID-19 outbreak has reoccurred in Shanghai in recent days, with multiple confirmed local cases. From Nov. 25 to Nov. 26, more than 20 hospitals were shut down in the city, with many local hospitals also suspending emergency services.

The Shanghai City Bus and Shanghai Long-Distance Passenger Terminal also have suspended many long-distance services to Jiangsu and Zhejiang, while interprovincial travel businesses have been told to halt their services.

The sudden shutdown of Shanghai’s major hospitals after only three new cases were confirmed by Chinese Communist Party (CCP) officials has raised suspicion. Netizens are asking why so many hospitals are closed.

“Where did the patient 1 in Shanghai go from Nov. 15 to Nov. 19? Why has it been covered up during this period?” one post reads.

“Nine hospitals are closed and patients who need emergency treatment have nowhere to go. The Shanghai medical system is nearly half paralyzed. There is no explanation,” another post reads.

“Then why do so many hospitals need to be shut down? The questions that the people really care about have not been answered!” another netizen wrote.

By the evening of Nov. 26, the CCP’s official media, the “People’s Daily,” reported that more than 20 hospitals had been shut in Shanghai.

In response to growing questions and speculation from the community, Lu Taohong, deputy director of the Shanghai Municipal Health Commission, said the three confirmed cases were neither medical staff nor hospital-related business personnel. He said one of them is a financial officer of a pharmaceutical company and has no direct business contact with the hospitals. He also said the three COVID-19 patients were on a trip to Suzhou, mainly to attend a lecture on ancient architecture. But among the dozen people who attended the dinner after the lecture, one was a doctor working in a hospital.

The statement from authorities hasn’t convinced netizens about the situation in Shanghai’s hospitals or how the outbreak started, with one person accusing the CCP of continuing to cover up what was happening with the outbreak.

“Their story is getting more and more unbelievable,” the netizen wrote.

Another netizen said of the situation in the CCP’s China, “You can’t believe what the so-called experts say at all. They never tell the truth.”