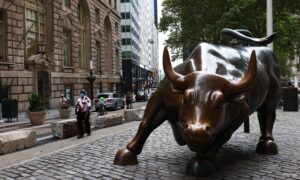 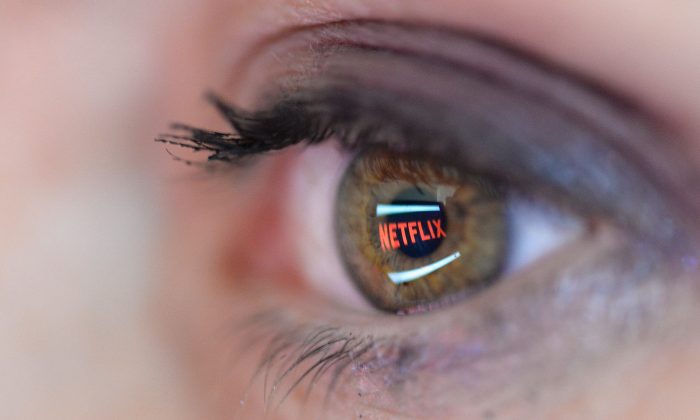 In this photo illustration the Netflix logo is reflected in the eye of a woman on Sept. 19, 2014 in PARIS, France. (Pascal Le Segretain/Getty Images)
Markets

NEW YORK—The mash-up of old and new media may not be a winning combination for the new S&P communication services sector index as its highest fliers face regulatory threats and challenges to user growth.

The reconstituted sector, which debuted at the end of September, includes telecom, internet, media, and entertainment companies such as AT&T Inc., Walt Disney Co., and Twitter Inc.

Three of the five momentum stocks collectively known as FAANGs—Facebook Inc., Netflix Inc., and Google parent company Alphabet Inc.—make up roughly half of the new sector by market capitalization.

The addition of several FAANG stocks, among the fastest-rising shares on the S&P 500, has brought more attention to the once-sleepy sector, formerly known as telecom. Indeed, so far communication services has closely tracked the technology sector. Both have slid significantly during sell-offs in October, including a 5.3-percent drop for the S&P 500 over Oct. 17-18.

The two indexes recovered somewhat in trading on Oct. 12. The communication sector was last down 5.3 percent month-to-date, ahead of tech’s 6.0 percent slide.

On one hand, the communication sector’s old-media names have cushioned it somewhat in comparison to tech’s steeper plunge, but those less growth-oriented companies also limit the sector’s upside potential.

Also, several of the sector’s growth companies—Facebook, Alphabet, and Twitter—face regulatory risks that tech companies do not. Recent disclosures of privacy breaches have increased concern among some investors that the U.S. government could soon target internet companies with new regulations.

“The regulatory pendulum tends to swing from ‘not enough’ to ‘too much,’ and it will take time to balance,” said Scott Wren, senior global equity strategist at Wells Fargo Investment Institute in St. Louis. “In the meantime, we have to think about overregulation.”

As a result, market strategists have been less than enthused. On Oct. 8, Wells Fargo Investment Institute gave the sector an “unfavorable” rating. Bank of America Merrill Lynch and RBC Capital Markets rate the sector “underweight.”

On Oct. 8, Google announced that private data from 500,000 users of its Google+ social network, whose consumer version is being shut down, may have been exposed to external developers. On Sept. 28, Facebook said that hackers had stolen digital login codes allowing them to take over user accounts. Some 29 million accounts were affected, the company said in an update on Oct. 12.

Executives from Facebook and Twitter had testified before Congress in September on their companies’ data security practices.

“That would be a concern because Netflix is so dependent on the international side in terms of its growth,” Morgan said. “The domestic side has become pretty mature.”

Netflix is scheduled to report its third-quarter results on Oct. 16.

Given the risks to the communication sector’s internet stocks, the sector is less attractive than technology or consumer discretionary for investors seeking growth, said Wren. At the same time, the sector’s relatively high price-to-earnings ratio and low yield make it unsuitable for value-oriented investors.

Also, two communication stocks, Netflix and Alphabet, are among the most trade-sensitive within the 100 largest U.S. stocks by market cap, according to an Oct. 4 note from Morgan Stanley.

Both have been more reactive to Chinese market assets relative to other large-cap stocks since March when the U.S. government first announced tariffs on Chinese goods, said Brian Hayes, quantitative analyst at Morgan Stanley, in an email to Reuters.

To be sure, the FAANG stocks remain among the most popular buys on Wall Street. The NYSE FANG+TM index, which holds those stocks along with several other growth stocks, including Twitter, is up 15.1 percent year to date, well above the S&P 500’s 3.6-percent advance.

But with that popularity also comes outsized potential for downside in the sector they dominate.

“The level of valuation tends to be quite high,” said Tim Ghriskey, chief investment strategist at Inverness Counsel in New York. “That’s the primary issue here and the primary risk.”