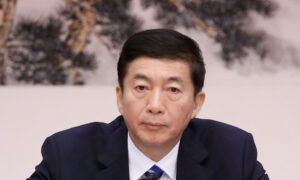 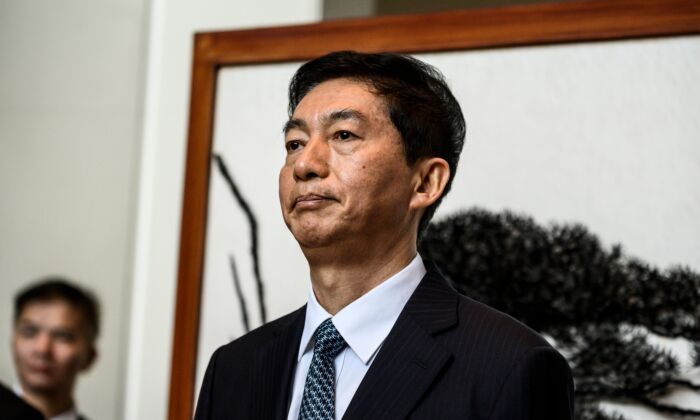 Luo Huining, the new head of the Chinese liaison office in Hong Kong, speaks briefly with the media in Hong Kong on January 6, 2020. (STR/AFP via Getty Images)
HK Current Affairs

The day before, he visited Shenzhen, the southern Chinese city that borders Hong Kong, leading analysts to believe that he has been tasked with promoting the Greater Bay Area (GBA) project in Hong Kong.

Launched in July 2017 by the Chinese central government, the GBA project aims to connect the economies of China’s Guangdong Province, Hong Kong, and Macau. The two former European colonies, along with nine mainland Chinese cities in Guangdong, would become part of a new tech and manufacturing hub akin to San Francisco Bay Area.

On the afternoon of Jan. 9, Luo Huining, the new head of Hong Kong’s Liaison Office, met with Carrie Lam, the Hong Kong chief executive, at her official residence in the Central district.

The Liaison Office issued a press release about the meeting. Luo and Lam did not directly speak to media.

According to the release, Luo endorsed Lam’s efforts to “maintain social stability” during these past few months, adding that the office would lend its support to Lam. That turn of phrase is an oft-use euphemism by the Chinese regime to mean squashing dissent.

For over six months, Hongkongers have staged mass protests against Beijing’s encroachment into city affairs, accusing Beijing of violating its promise to preserve the territory’s freedoms and autonomy upon its transfer of sovereignty from Britain to China in 1997.

The press release also mentioned that they agreed to “restore social order and stop violence”—a phrase Hong Kong police have used to describe their efforts to quell protests—and develop the GBA. Many protesters are opposed to the GBA, considering it Beijing’s attempt to integrate Hong Kong with the mainland.

That same afternoon, Luo also visited Tung Chee-hwa, the first Hong Kong chief executive after the 1997 handover. He is also one of the 24 vice chairmen of the Chinese People’s Political Consultative Conference, a political advisory body to the Chinese Communist Party (CCP).

According to another official news release from the Liaison Office, Tung spoke to Luo about “Hong Kong’s current social situation and deep-rooted conflicts.”

Among the CCP officials who met with the entourage were: Shenzhen city Party boss Wang Weizhong and Shenzhen mayor Chen Rugui.

During the meeting, both sides discussed cooperation between the two governments and the GBA project, especially promoting youth to set up businesses in the other city and enhancing trade, according to Shenzhen News.

Wang had worked for Luo from June 2016 to February 2017, when Luo was the provincial Party boss in Shanxi.

In the past, Chinese leader Xi Jinping has praised Macau as a paragon of a region where “one country, two systems” has succeeded.

Tang pointed out that while Beijing’s investments in Macau yielded more wealth for the territory, its freedoms have been increasingly eroded.

“The CCP’s theory is guiding people to pursuit for money, then people won’t have political ambitions,” Tang said.

According to Macau government figures published on Macauhub, Macau’s GDP was $55 billion in 2018, with per capita GDP at $81,600—the fourth richest region in the world and 8.5 times that of China’s per capita GDP, $9,633, according to the IMF (International Monetary Fund).

Meanwhile, the last time human rights group Freedom House has ranked Macau’s freedom separately from mainland China was in 2004, when it was rated “partly free” due to the lack of political rights and press freedom.

Among Hong Kong protesters’ demands are for universal suffrage in elections for the chief executive and for representatives to the city legislature. The chief executive is currently voted in by an electoral committee comprised of mostly pro-Beijing elites.

Judging from Luo’s first public speech on Jan. 6, which struck a more conciliatory tone similar to Xi’s New Year’s speech, Tang predicted that Luo would not clamp down on protests at the moment.

“If the CCP wants to develop Hong Kong’s economy, it cannot continue the suppression [of protests],” Tang predicted.

But Shi Shi, another U.S.-based China commentator, told the Chinese-language Epoch Times that Luo’s embrace of the GBA project means that Beijing has not changed its repressive policies in Hong Kong and will want to eventually “convert Hong Kong into a mainland city,” Shi said.