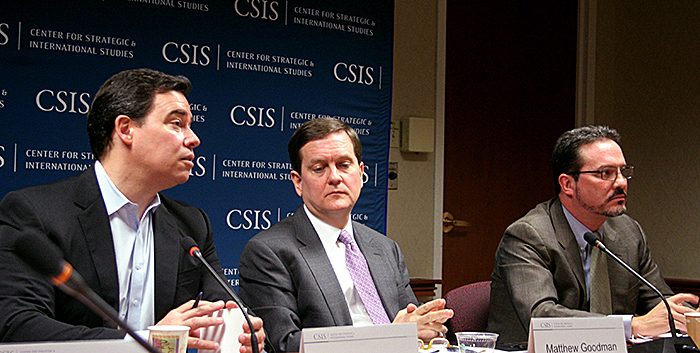 WASHINGTON—The future chosen leader of communist China, Xi Jinping, arrives in Washington today for talks with President Obama, Vice President Joe Biden, cabinet officials, and leaders of the House and Senate. There will also be opportunities for business leaders to have frank discussions with Xi and the Chinese delegation.

Next on Xi’s itinerary is a visit to Iowa, followed by Los Angeles. Vice President Joe Biden will play host to Xi for his visit of three days, February 14–17.

During the several meetings, Xi and Biden will have opportunities to spend several hours, both formal and informal, in discussions. This will be the third time that Vice President Biden will have met Xi Jinping. They first met in Rome and most recently in China last August—a visit hosted by Xi. The two leaders have spent a total of about 10 hours together, in formal and informal settings. The coming meetings are a continuation of previous discussions.

Russel was speaking with three other White House officials in a conference call to the press Feb. 10 to discuss Xi Jinping’s upcoming visit to the United States. They have been involved in the planning of Xi’s visit.

The importance of face-to-face meetings between the country’s leaders was underscored by Russel who observed that President Obama has met with China leader Hu Jintao more than ten times, and met with Premier Wen Jiabao more than four times.

Antony Blinken, Deputy Assistant to the President and National Security Advisor to the Vice President, said this visit provides a “chance for U.S. to reciprocate, build on the August visit, and build on relationships with Vice President Xi.”

Blinken refers to Xi as “vice president,” which is the title the Party prefers, but in fact his title in China is “vice chairman.”

Unlike China’s previous leaders, Jiang Zemin and Hu Jintao, Xi was “not handpicked by Deng Xiaoping, but ‘helicoptered up’ through the ranks,” said Michael Green, Center for Strategic & International Studies (CSIS), at a press briefing, Feb. 9.

China’s leader from 1978 to 1992, Deng opened up the Chinese economy and was responsible for the Tiananmen Square massacre.

Xi will assume three titles, but not all at the same time. He will become general secretary of the Chinese Communist Party (CCP) this fall at the 18th Party Congress and will become China’s chairman in March 2013. In the past, the Chinese leader also has taken charge of the military. Currently, Xi is vice chair of the Central Military Commission and will likely assume the chairmanship in two years, said Bonnie Glaser, CSIS, at the press briefing on Feb. 9.

“Building a relationship with an official of China that seems likely destined to be a figure in the Chinese political system for years to come is important, which is why Obama and Hu Jintao agreed to the visit,” during the state visit last year, said Russel.

The visit will allow a frank discussion of issues and allow Xi to “see the U.S. anew for himself and hear what Americans are concerned about and thinking,” Russel added.

Michael Froman, assistant to the president and deputy national security advisor for international economics, said exports exceeded $100 billion and have been growing twice as fast as exports to rest of world, and so the relationship is very important.

The above emphasis on trade relations was also made by the White House officials who are directly involved in the planning. The refrain that they often repeated at the teleconference is that China must learn to work within the “international rules and norms.”

The concept of “containing” China is “absolutely not the goal,” said Ernest Bower, CSIS, with reference to U.S. trade relations in Southeast Asia.

“As the president has articulated frequently we welcome the rise of China. At the same time we insist that China adhere to accepted rules and norms of global economic and security behavior,” said Russel.

After his meeting with the president and with Secretary of Defense Leon Panetta and Chairman of Joint Chiefs of Staff Gen. General Martin Dempsey at the Pentagon, Xi will be meeting with U.S. business at the U.S. Chamber of Commerce. “It’s important for Chinese leaders to hear directly from the U.S. business community the promise and problems of doing business in China,” said Anthony Blinken, deputy assistant to the president and national security advisor to the vice president

“We certainly hear a much louder chorus of complaints from American companies about business with China and that has been one of the inputs to dialogues with China about leveling the playing field, indigenous innovation, strengthening IPR [intellectual property rights] protection, and living by international rules and norms that President Obama discussed with Hu and Wen last year in Asia,” said Froman.

However, don’t expect breakthroughs on major issues, such as currency undervaluation and intellectual property theft. Xi will undoubtedly be confronted about these issues in meetings with the business community and congressional representatives. The big issues will be reserved for the spring meetings, said Goodman. Xi is not in the top spot yet, and so it is not to be expected that he would be breaking new ground.

But both sides want to come up with some “deliverables,” they can tout. The CSIS scholars said, “In a nod to U.S. agricultural export interests, the large Chinese delegation is expected to announce substantial purchases of soybeans in connection with Xi’s visit to Iowa.” And there may be some trade irritants worked out when Xi is in California, when he meets with Los Angeles Mayor Antonio Villaraigosa and California Governor Edmund Brown.

While trade may be taking center stage, the White House officials insist that China’s deteriorating human rights situation will be on the agenda.

“We don’t sacrifice the important issues for the sake of having a comfortable visit nor do we shy away from candid private conversations with the Chinese about human rights. We routinely, regularly, invariably raise our concerns about human rights situation in China,” said Russel.