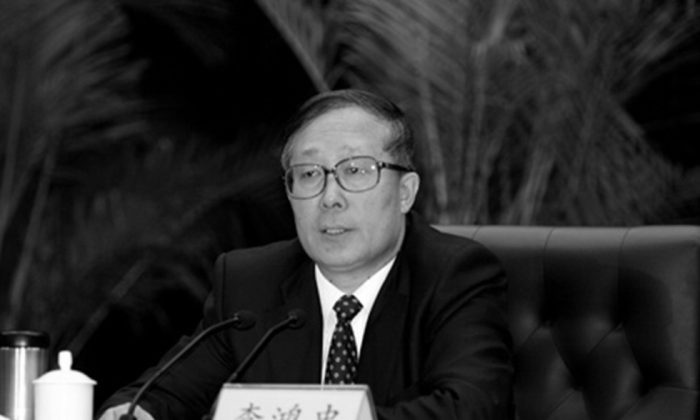 The top political executives of Tianjin, a bustling port city in the north-eastern part of China, were recently purged within the span of a month. A new leader has since been installed in the prominent Chinese city, but his career prospects—once fairly predictable—are unclear in the present political climate.

If the usual political arrangements of the Chinese regime were to be followed, Li’s political future would be bright. The Party boss of Tianjin normally goes on to serve in the Politburo, a powerful executive body comprised of 25 elite. And the 19th Party Congress, an important political conclave where major leadership changes are sanctioned, is slated for next year.

But all is not usual in the Chinese regime. Under the leadership of Party leader Xi Jinping, those associated with political rival and former Party boss Jiang Zemin frequently find themselves sidelined—including those who publicly make gestures of allegiance to Xi.

Li Hongzhong was one of the first few provincial leaders to go through the motions of hailing Xi Jinping as “core” leader earlier this year. But his prompt salute may not have been borne out of  genuine loyalty or obedience.

In an interview with the Chinese language edition of Epoch Times, Huang Jinqiu, a dissident writer and a member of the free expression non-profit Independent Chinese PEN Center, said that Li Hongzhong became a provincial boss under the auspices of Jiang Zemin. But after Xi took office in 2012, Li appeared to switch sides, and saw that the province of Hubei steadfastly following the leadership and instructions of Party Central.

Typically, Chinese officials who benefited under the system of corruption that Jiang entrenched offer open or passive resistance to Xi’s rule, which says it promotes honest officials and disciplined cadres.

Outright opposition to Xi’s leadership can derail an official’s political career. Zhang Chunxian, the former Party Secretary of Xinjiang Province and Jiang loyalist, refused a public chance to align himself with Xi Jinping in March, and is also suspected of masterminding a letter calling for Xi’s resignation. He was shunted to a sinecure in August; if Zhang stayed on as Xinjiang chief, he could retain his Politburo seat after the 19th Party Congress.

But Xi cannot possibly purge all officials affiliated with Jiang, and still has to make use of those who “can see where the wind is blowing and keep pace with his Party Central,” says Huang, who has written hundreds of essays analyzing Chinese communist politics, and has spent eight years in jail for his work.

Li Hongzhong, however, hasn’t escaped all liability because “anything is possible under the anti-corruption era of Xi Jinping and Wang Qishan,” Huang Jinqiu said. Wang is the head of the Party’s internal disciplinary agency.

Huang added that complaints have been filed against Li in Hubei, and “there’s no knowing if those cases would be exposed, or if new corruption charges will surface.”

When Li was Governor of Hubei in 2010, he chastised a reporter from a semi-official media outlet and tried to seize her recorder after she asked him to comment on an attempted rape by a government official. Over 200 journalists and scholars later signed an open letter calling for Li’s resignation.

In fact, Li’s transfer from Hubei to Tianjin could allow anti-corruption police to “conduct more thorough investigations in Hubei,” Huang the dissident writer said. Li coming to head Tianjin might seem like a promotion, but since he is no longer at his power base, “it’s like lifting the lid off Hubei.”

According to Huang, Li’s “relationship network” and other acts of malfeasance in Hubei can now be dug up and exposed.