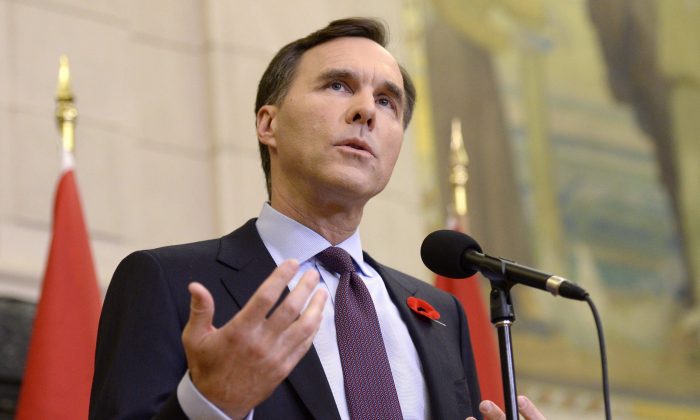 Change coming for cities, citizens as roads, bridges to get privatized
By Rahul Vaidyanath

OTTAWA—The Liberal government is betting the farm on infrastructure investments, so amplifying every dollar spent raises the chance of returning the economy to faster growth.

To that end, the government announced the creation of the Canada Infrastructure Bank (CIB) in its Fall Economic Statement on Tuesday, Nov. 1.

It is a bold move from the federal government, though the devil’s in the details. The biggest change will be to have the private sector, along with foreign investment, playing the leading role.

The change could also mean less authority for municipalities and provinces, while Canadians get used to paying more tolls and other charges.

The government committed to investing at least $35 billion over 11 years, but the main thrust of the CIB is to attract private sector capital.

“We want to ensure that for every federal dollar, we find a way to crowd in pension funds and institutional investors for four or five additional dollars,” Finance Minister Bill Morneau told reporters.

The CIB’s creation was one of the first three recommendations from the finance minister’s Advisory Council on Economic Growth (ACEG).

“Wherever possible, federal tax dollars spent on infrastructure should be amplified by institutional capital,” said the ACEG in its first report.

The new organization will be at arm’s length from the government—like a Crown corporation—and will be legislated in Budget 2017. The intention is for the CIB to be operational next year.

Build It and They Will Come

The ACEG calls the creation of an infrastructure bank a “once-in-a-generation opportunity for Canada.” It states that the amount of infrastructure investments held by pension funds today is less than 10 percent of the total capital available for these types of investments from pension and sovereign wealth funds alone.

Wherever possible, federal tax dollars spent on infrastructure should be amplified by institutional capital
— Advisory Council on Economic Growth

Also, with about $12 trillion invested in negative-yielding bonds, the need for long-term investments with positive returns is obvious.

Morneau touted the new infrastructure bank saying, “We know that Canada is a very desirable place for international pension funds that would like to make investments in infrastructure.”

“Canada is seen as this mecca, this promised land,” Lee said. “We’re the gold standard for investments because the risk is so low.”

The second requirement for attracting private capital is straightforward and simple projects such as toll roads and bridges.

And being at arm’s length is a big plus for the CIB, says Lee, as political interference should be minimized. Then the private sector can rank and prioritize the projects and run a tight ship implementing them as it will mostly be private sector money at work.

The Federation of Canadian Municipalities (FCM) was pleased with the announcement and the role it will play going forward.

CEO Brock Carlton said the CIB won’t undermine the ability of municipalities to make their own decisions, and he noted that the FCM will provide input into its design.

“I’m encouraged by what we’ve seen today,” said FCM President Clark Somerville. “It’s another tool in their tool box that they [the municipalities] can go to for their financing.”

But Lee thinks municipalities and provinces are going to fight the CIB “tooth and nail” as they’ll be losing a lot of their discretion on infrastructure spending. “They’re going to demand that they have signoff authority on any project that falls within their jurisdiction,” he said.

A road can be very easily transformed into a private good like a car.
— Ian Lee, Carleton University

“Does the project really make sense or is it just part of the wish list of the mayor who is trying to get re-elected?” Lee said. Private capital is looking for a return on investment, which imposes a strict market test on projects.

“A road can be very easily transformed into a private good like a car,” Lee said. A key factor in Canada’s infrastructure deficit is potentially private goods in the public domain like roads, bridges, and ports needing upgrades.

“There’s so much private goods that are in the public domain. We’ve got to rationalize our approach to it,” Lee said. Roads, bridges, and ports need to be maintained and the government can’t pay for it all.

Those parts of the country’s infrastructure that can charge a fee should, and the ones that can’t must remain pure public goods, which are the ones that the government continues to maintain, Lee said.