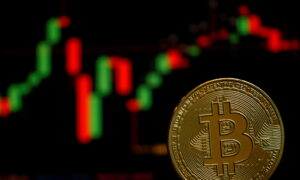 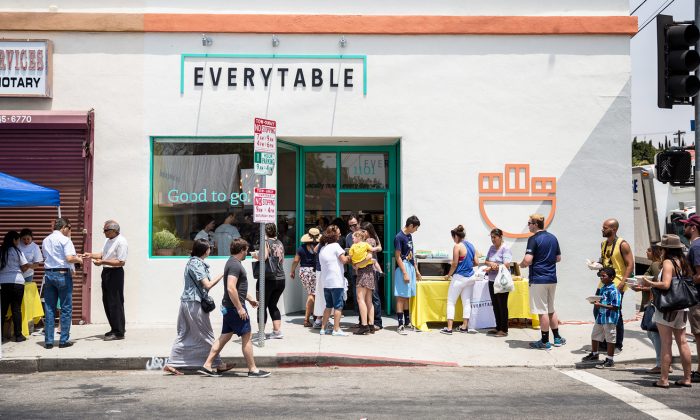 The Everytable first restaurant in South Los Angeles which opened on July 30, 2016. Each restaurant location has different pricing structures depending on the neighborhood. (Everytable)
Business

It was the height of the financial crisis, and Sam Polk, a senior millionaire trader at one of Wall Street’s largest hedge funds, was feeling like the odd man out.

While his colleagues obsessed and fretted about how new government regulations would impact their bonuses, he was thinking the regulations might be good for the system. Polk couldn’t shake his sinking feeling that the system was broken.

After he got up the courage to quit his high-rolling lifestyle, Polk went through a period of internal reflection and decided he wanted to start a nonprofit, teaching caregivers in low-income communities in South Los Angeles about a healthy approach to food. He had gone through his own fair share of food issues in life, so working with food made sense.

But Polk soon realized that even if people had the groceries in hand, they had no time to cook. So he designed a for-profit business model in which he could sell packaged meals at a reduced price. Polk sees his social enterprise as involving the community in an exchange of commerce they can afford, rather than charity.

“Healthy food is a human right,” said Polk, executive director of Groceryships and co-founder and CEO of Everytable, “and the fact that it is a luxury product today is not OK.”

Polk’s innovative business approach to solving a systemic social problem makes him a social entrepreneur, a business model that has exploded in popularity in the last five years, according to Patrick FitzGerald, a serial entrepreneur and MBA lecturer at the Wharton School of the University of Pennsylvania.

FitzGerald estimates about 50 percent of the students graduating from Wharton who go on to start businesses will articulate a social benefit of their business, even if the business is not wholly dedicated to solving a systemic social problem.

A social benefit can be the product itself, such as a healthier alternative to current food options.

It could also be defined in terms of accessibility, through the pricing of the product or service. For example, it could be free for people in need, while others pay full price.

Another benefit could be in managing the environmental impact of the product’s supply chain, or in the way the company recruits staff, such as choosing to hire and help ex-convicts, people with disabilities, or immigrants.

FitzGerald said entrepreneurs see the benefits of adding “layers to the company,” especially those that will win customers who are looking for companies that seek to make a difference.

Social entrepreneurs start both nonprofit and for-profit companies, but the concept of a for-profit social enterprise is newer.

The latter can be controversial to free market advocates. They say it distorts the market by placing a social value above the profit motive. They also say it assumes free markets do not have social benefits and therefore need to be reformed, both assumptions the advocates refute.

Traditionally, the nonprofit and for-profit sectors have operated in silos, and nonprofit growth has been limited by donors’ expectations about how their money is spent.

Husock says there is a growing trend of entrepreneurs introducing innovative business strategies in the nonprofit sector, including new ways to earn revenue through the sale of a product or service.

For example, Hot Bread Kitchen, a nonprofit that employs and supports immigrant food entrepreneurs in New York, has done this successfully. It earns 65 percent of its revenues from bread sales and kitchen space rentals, while the remainder comes from philanthropic support.

Ruth Shapiro, principal of Keyi Strategies, a global consulting firm, describes the changes in terms of a continuum, where a lot of the innovation is happening in the middle space, including within the investment community.

There has been a “tightening up of philanthropic dollars,” which has spurred innovation, FitzGerald said, and there is a desire for the money to act more like an investment that can be tracked, so that results can be measured more accurately.

He ascribes it to “a brand new world” informed by a desire for sustainability.

Executive director Gabriel Brodbar started the NYU Reynolds Program in Social Entrepreneurship 12 years ago. At the time, Duke was the only other university in America that had a program. Today, most major business schools have one.

According to Brodbar, social entrepreneurship is about systems change, pattern-breaking, and infrastructure change. It is also about breaking down barriers between people and professions, and even about learning to be self-reflective and adaptive, “because everything is community-led.”

Brodbar describes the development of an ecosystem of new thinking about business, in which most professions have a role to play—for example, the attorneys who design new legal business documents, and the software engineers who design databases and models to account for new ways of measuring business success—and there is infrastructure that helps investors to participate.

Polk said there were 60 individuals and two venture capital funds that provided seed funding for Everytable, which he opened with co-founder David Foster last summer. The business idea came to Polk only after he spent time listening in on support groups run by his nonprofit Groceryships.

“I understood on a deep level [that] objectively, stress and depression are twice as high in low income areas,” Polk said. He then correlated this “deep trauma” with the problem of food and health inequality.

Everytable’s aim is to replace deep-fried fast food with healthy fast food, and to make it more affordable and attractive than McDonald’s or KFC.

At Everytable’s first retail location in South L.A., it costs $3.95 for a chef-driven packaged meal, such as Yucatan Chili or Pozole Rojo. In more affluent neighborhoods, where they expect to open stores this year, Polk and Foster plan to charge $8, which will still be lower than comparable options in those areas.

By using a central commissary to make the food, and by opening modest-sized retail outlets that require few staff, Polk said they can sell efficiently and profitably at each price point. When the profits are blended, it can be an “economically powerful company,” he said.

“It is a system where everyone wins, and it needs everyone to play a part for the whole system to work,” said Polk.