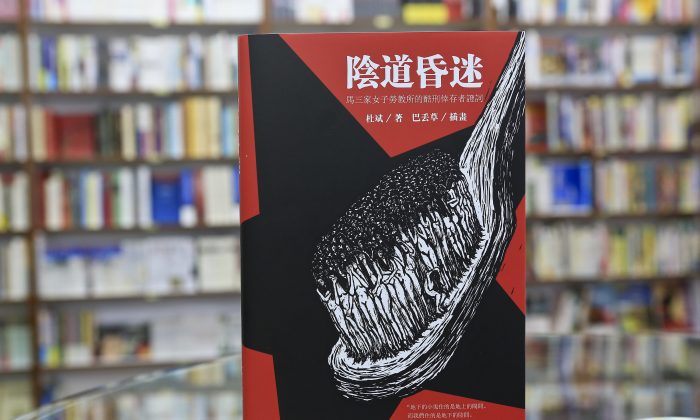 The book is by former New York Times photojournalist Du Bin. In May 2013 he released in Hong Kong a documentary film on the same topic, Above the Ghosts’ Heads: The Women of Masanjia Labor Camp. In 2011 Du published the book Toothbrush in 2011 in Taiwan on the torture of Falun Gong practitioners.

“As a human being, there’s no reason or excuse to tolerate the atrocities that happened in ‘Masanjia Women’s Labor Camp,’ including the long-time use of a uterine dilator for tube feeding women, making women lie in their own waste, tying up several toothbrushes and twisting them in women’s vaginas, putting pepper powder in women’s vaginas, shocking women’s breasts and vaginas with electric batons, and putting women into male cells …” the author Du wrote on twitter after the release of the book.

The book records in detail the testimonies of dozens of survivors from Masanjia Labor Camp who were victims or eyewitnesses. One of the important sources of the book is a diary written by Liu Hua, a former inmate who witnessed those tortures to Falun Gong practitioners and petitioners. Liu said she took the diary out of Masanjia Labor Camp by hiding it in her vagina.

“It’s just a hell on earth,” Liu told New Tang Dynasty television based in New York, “I’m a human being, I have conscience and humanity. Thus, I recorded those cases one by one, and spoke out about them after I was released.”

Mr. Du wrote in another twitter post, saying “We are human beings, not animals… This book is to remember the humiliation and tragedy inflicted on those women who carry the task of human reproduction.” Du’s books are not available in mainland China due to censorship.

Mr. Du was detained by Beijing authorities on May 31 last year for 37 days, after his documentary Above the Ghosts’ Heads was released in Hong Kong. His book “Tiananmen Square Massacre” on the topic of the 1989 democracy movement was also published in Hong Kong last May before his detention.

Later on in June, New York Times interviewed a dozen victims who were imprisoned at Masanjia and other labor camps around the country. The Times indicated that the most sustained and severe treatment is meted out to the Falun Gong practitioners, but other groups also experience abuse.

Falun Gong is a spiritual group in China that was banned in July 1999 by then-leader Jiang Zemin. He feared as a threat to his rule the burgeoning population of Falun Gong, which had reached over 70 million.

Jiang launched a national campaign against Falun Gong. Perhaps millions have been detained, according to Minghui.org, an oversea Falun Gong information website. Over 3700 Falun Gong practitioners have been confirmed killed due to torture and abuse, although the death toll is likely to be much higher due to the Chinese regime’s blockade of information in China. Researchers estimate that tens of thousands of Falun Gong practitioners have been murdered by having their organs removed for use in transplantation.

Masanjia Labor Camp is now closed, and the reform through labor system was officially abolished at the end of last year. However, Chinese media have reported that a number of former labor camps simply changed their names and continued in operation. A labor camp would, for instance, become a “detoxification center.”