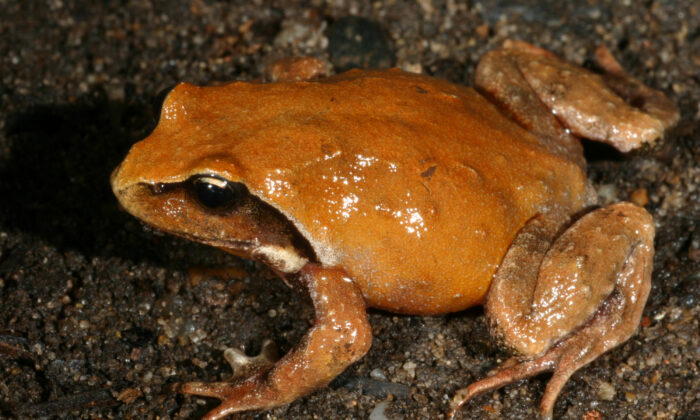 A supplied image obtained on Saturday, April 30, 2022, shows the newly discovered Philoria knowlesi, an already endangered mountain frog that calls Queensland's Gondwana Rainforest home. Australian scientists have discovered a new species of frog in south-east Queensland and it's already endangered. (AAP Image/Supplied by Queensland Department of Environment and Science) NO ARCHIVING, EDITORIAL USE ONLY
Australia

A new species of mountain frog has been discovered in the rainforests of New South Wales (NSW), and Queensland, Australia.

The species Philoria knowlesi was discovered by researchers from universities, the Commonwealth Scientific and Industrial Research Organisation, and the South Australian Museum, alongside ecologists from the Department of Environment and Science (DES).

The DES and external researchers suspected the existence of an undiscovered mountain frog species in 2006 when they began to collect and analyse the DNA of mountain frog populations in areas of Queensland and NSW. The areas monitored by the research team were Mount Barney National Park and Levers Plateau in Northern NSW, which are within the Gondwana Rainforests, one of Australia’s UNESCO World Heritage sites.

DES Senior Conservation Office Harry Hines said in a department media release that although researchers had long suspected there was a new species, in order for it to be confirmed, genetic evidence of the frog species was required.

“As there were no DNA samples available from Mount Barney and Lever’s Plateau, the taxonomic status of these populations remained unresolved for many years,” Hines said.

“Over the past 16 years, we have gathered DNA samples and determined these populations are actually genetically distinct and warrant being regarded as a new species,” he said.

Philoria knowlesi is varied in colour and pattern and is limited to upland rainforests and the areas adjacent to the wet eucalyptus forests. The species breed in small bogs, the banks of headwater streams, and seepages, where the males can build breeding chambers in wet areas for the tadpoles to entirely develop within during the spring and early summer.

“This new species of frog belongs to a lineage that is found only in rainforest vegetation communities,” key researcher from the University of Newcastle (UON) Honorary Professor Michael Mahony said.

Mahony and Newell said that the only known habitat of the Philoria knowlesi, the Gondwana rainforest, has one of Australia’s most diverse ecosystems.

“The rainforests of Mt Barney National Park in Queensland and the adjacent Mt Nothofagus National Park in New South Wales have special significance in the evolution of Australia’s biota,” they said. “This is why they are enshrined as part of the Gondwana Rainforest of Australia World Heritage Area.”

“There are currently seven known species of mountain frog, six of which are found only in the Gondwana rainforest area,” Mahony and Newell said.

Australian wildlife and critical habitats such as the Gondwana rainforests and the multiple species of mountain frog living within were extensively and significantly impacted by the Black Summer bushfires of 2019-2020.

The Australian federal government has sought to address the impact by dedicating $200 million (US$142 million) to a Bushfire Wildlife and Habitat Recovery Package. The most impacted areas and threatened species were prioritised for funding.

Furthermore, the commonwealth government provided $3.85 million to the Queensland government for the recovery of fire impacted areas in southern Queensland, such as the Gondwana Rainforests.

Officer Hines said that the mountain frogs that survived the Black Summer were still inhabiting areas that were burnt by the fires, according to the DES led and government-supported Queensland Bushfire Recovery Program.

“Not only that, but the increased survey effort resulted in the discovery of additional populations of the new species,” Hines said.

Additionally, he noted that the researchers were also able to gather the only systematic data on calling phenology, which  he said: “will support the design of future surveying and acoustic monitoring of the species.”

Hines said that the DES is currently working to preserve the habitat of the new frog species as a component of ongoing park management since, at the moment, the new species qualifies as endangered.

“There are a number of measures rangers are taking to support the recovery of fire-impacted areas of Mount Barney National Park and the Gondwana Rainforests, including where these frogs are found in Queensland,” he said.

The measures in place include a program to control feral pig populations, fencing to keep cattle out, ongoing fire management to limit risks of future bush fires, and weed control in surrounding areas. The weed control is intended to support habitat regeneration.

Prof. Mahony said that the new species was named Philoria knowlesi to honour environmentalist Ross Knowles, from St Ives, Sydney in NSW for his outstanding work on Australian frogs and conservation.

“And because of his long and tireless support of environmental values and conservation of Australia’s unique biodiversity.”

The formal description of the new frog species is included in a scientific paper published in the journal Zootaxa.