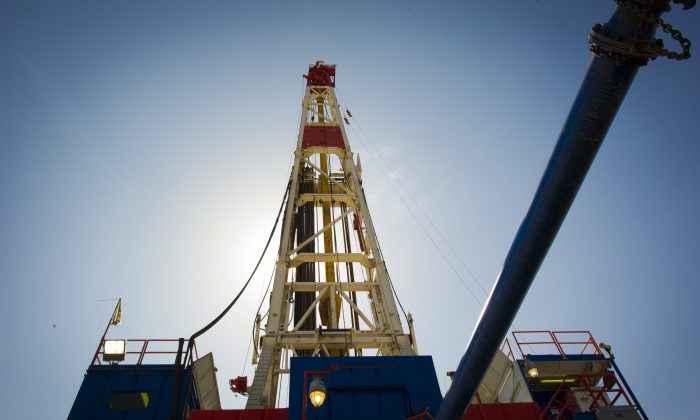 Two hazardous chemicals never before known as oil and gas industry pollutants – ammonium and iodide – are being released into Pennsylvania and West Virginia waterways from the booming energy operations of the Marcellus shale, a new study shows.

The toxic substances, which can have a devastating impact on fish, ecosystems, and potentially, human health, are extracted from geological formations along with natural gas and oil during both hydraulic fracturing and conventional drilling operations, said Duke University scientists in a study published today in the journal Environmental Science & Technology.

The chemicals then are making their way into streams and rivers, both accidentally and through deliberate release from treatment plants that were never designed to handle these contaminants, the researchers said.

The findings have major implications for whether stronger regulations are needed to curb water pollution from fracking and other oil and gas industry operations. Over the years, the industry has faced questions about unsafe well design that allows methane to seep into drinking water, and about lubricants and other chemicals it adds to frack water. Duke researchers have conducted a number of studies on these problems.

Now add to the list of concerns ammonium and iodide – two naturally occurring, dangerous chemicals that are essentially unregulated in oil and gas wastewater.

“We are releasing this wastewater into the environment and it is causing direct contamination and human health risks,” said study co-author Avner Vengosh, professor of water quality and geochemistry at Duke’s Nicholas School of the Environment. “It should be regulated and it should be stopped. That’s not even science; it’s common sense.”

Steve Everley, spokesman for the oil and natural gas industry group, Energy in Depth, pointed out that a tightening of Pennsylvania regulations in 2011 had ended deliberate discharges of untreated fracking wastewater to the state’s rivers or streams – a point that the Duke study also makes. But some oil and gas wastewater, primarily from conventional drilling sites, is released into waterways after treatment at industrial brine facilities. Also, state records show more than 50 accidental spills of fracking wastewater in Pennsylvania last year, according to the group, Fractracker Alliance.

Nevertheless, Everley said there are already regulations in place to penalize hydraulic fracturing companies that spill wastewater, and the study confuses the issue by lumping them together with conventional producers.

“I’m not sure if the intention was to malign ‘fracking’ by cleverly presenting data on wastewater that doesn’t come from fracking, or if the report was just poorly written,” he said in an email. “In any event, it’s difficult to see how this can provide a meaningful contribution to the public dialogue, seeing how it does more to confuse the public’s understanding of wastewater treatment than anything else.”

When dissolved in water, ammonium can turn to ammonia, highly toxic to aquatic life. The Duke team found ammonium levels in streams and rivers from energy industry wastewater outflows at levels 50 times higher than the U.S. Environmental Protection Agency’s water-quality threshold. Under a loophole created by Congress in a 2005 energy law, fracking wastewater isn’t regulated under the U.S. Safe Drinking Water Act.

Meanwhile, the Duke scientists found that the iodide contamination from energy operations – while not toxic by itself – promotes the production of disinfection byproducts when it comes in contact with the chlorine that is used to treat most drinking water systems. Previous studies have shown that such disinfection byproducts have toxic and carcinogenic properties, but only a few are regulated.

Previous studies have shown that such disinfection byproducts have toxic and carcinogenic properties, but only a few are regulated.

“As far as we are aware, iodide and ammonium are not regulated, nor monitored in any of the [oil and gas] operations in the United States,” the researchers said in their paper.

Terrence Collins, director of the Institute for Green Science at Pittsburgh’s Carnegie Mellon University, was not involved in the study but said findings of iodide contamination are particularly worrisome, especially if stream or river water is extracted downstream for drinking water.

“Widely practiced chemical treatments to kill pathogens are likely to cause the iodide to become incorporated into organic matter in the drinking water, and I am concerned that this could result in increased incidences of cancer,” he said in an email.

The recent boom in U.S. oil and gas production has been accompanied by a surge in wastewater production. Fracked wells produce about 1 million to 2 million gallons of wastewater per well. For conventional wells, the volume is less but the risk of contamination with ammonium and iodide is the same. “The method doesn’t matter,” said Vengosh.

“Fracking fluids are not much different from conventional oil and gas wastes,” said Jennifer Harkness, lead author of the study and a doctoral student at Duke.

Off to the Rivers

In states like Texas and Oklahoma, with long histories of conventional drilling, oil and gas wastewater is disposed by injection in deep underground wells. But in Pennsylvania, a hotbed of fracking, there are few such sites. Some oil and gas wastewater is discharged to waterways after treatment at commercially operated industrial brine treatment plants, which were not designed to remove ammonium or iodide.

There also have been wastewater spills, including seeps from illegal disposal, leaking from surface impoundments, and truck tanker accidents. Some states even have purposely spread the salty oil and gas wastewater on roads to suppress dust or for de-icing.

The estimated volume of oil and gas industry wastewater generated in the U.S. is now more than 837 billion gallons (3.18 billion cubic meters) per year. For comparison, that’s nearly three times the volume of all the oil and gasoline that the United States consumes each year (291 billion gallons).

The researchers said their study adds to a growing body of evidence that government action is needed. “There are significant environmental and ecosystem impacts of current [oil and gas wastewater] disposal practices in the U.S.,” they wrote, “Regulatory action is needed to address these concerns.”

Republished with permission from The Daily Climate. Read the original.