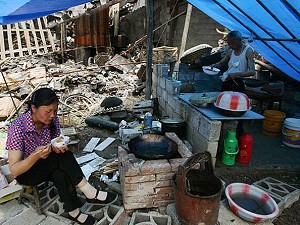 An earthquake survivor eats under a tent in Leigu Township of Beichuan County on in Mianyang of Sichuan Province, China. (China Photos/Getty Images)
China

MIANZHU, China—New aftershocks toppled 420,000 houses and injured dozens in southwest China on Tuesday, heaping destruction and fear on a region struggling to recover from the country's worst earthquake in decades.

Another tremor, of 5.7 magnitude, hit neighbouring Ningqiang county in Shaanxi province, the agency said, citing the China National Seismological Network. No deaths had been reported.

The aftershocks struck the mountainous region as soldiers worked non-stop to dig a giant sluice to ease pressure on a swelling “quake lake”, and the planned evacuation of hundreds of thousands of people to avert a new disaster continued, state media said.

The official death toll from the 7.9 magnitude quake that struck Sichuan province on May 12 was raised on Tuesday to 67,183, but it was certain to rise as 20,790 were listed as missing. The quake injured nearly 362,000 people.

Soldiers and police trekked to the Tangjiashan lake carrying dynamite to blast mud and rubble that has blocked a river and created the largest of 35 quake lakes formed when landslides triggered by the massive tremor blocked streams and rivers.

Some 30,000 people living below the lake in and around Beichuan have been evacuated as a precaution.

In Mianyang, which includes Beichuan town, 150,000 people will have been evacuated by midnight on Tuesday, in line with a contingency plan should the lake's 300 million cubic metres of water burst the barrier, Xinhua reported.

“It's better for them to complain about the trouble that the evacuation would bring than to shed tears afterwards…” Liu Ning, an official with the Water Resources Ministry, was quoted as saying.

By Monday night, around 600 engineers and soldiers had gathered at the landslip and were taking turns to work through the night, using bulldozers brought in by helicopters.

The troops were expected to finish the sluice by June 5 and would not discharge floodwater in the coming days, even though the water level rose a further 1.79 metres on Tuesday and authorities were preparing for the worst, Xinhua said.

The most powerful of thousands of aftershocks killed at least eight people on Sunday, hampering relief efforts and terrifying quake survivors anew.

Mianyang, which includes Beichuan and where more than 16,000 people died in the original quake, replaced its mayor on Monday, but no reason for the change was made public.

Premier Wen Jiabao said on Tuesday that relief work would shift to reconstruction for the 15 million people displaced by the quake.

The massive relief effort, which involves providing food, tents and clothing for millions, some in isolated villages, and the reconstruction of housing and infrastructure are expected to take up to three years.

The biggest appeal is for tents and prefabricated housing units for millions of people made homeless just as the weather turns hotter and wetter, increasing the risk of disease.

“The temperature in the tents will be between 31 and 37 degrees Celsius in the next two days, so ventilation and cooling measures must be kept in mind,” Xinhua said.

Health officials claimed they were confident they could prevent outbreaks of epidemics.