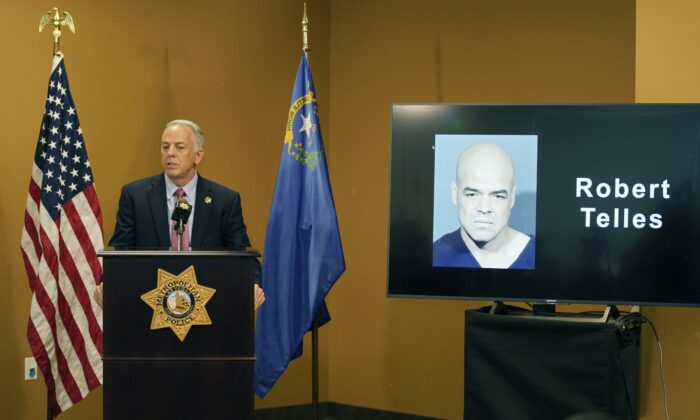 A Nevada elected official was charged with the murder of Las Vegas Review-Journal investigative journalist Jeff German during an appearance in court on Sept. 13.

Clark County Public Administrator Robert Telles, a Democrat, was arrested last week on a charge of “open murder” following a search of his home by authorities which led to a positive match for his DNA with German’s DNA found at the crime scene, Las Vegas Metropolitan Police Department Capt. Dori Koren told reporters at a press conference on Sept. 8.

Telles, 45, appeared in a Clark County court after he was formally charged with murder with a deadly weapon in German’s death, according to a criminal complaint filed Monday and obtained by CNN.

The complaint alleges that Telles “did willfully, unlawfully, with malice aforethought, kill Jeffrey German, who was 60 years of age or older, with use of a deadly weapon.”

It further alleges that Telles stabbed German “multiple times about the body” and that police believe Telles was “lying in wait” for the journalist, adding that the murder was “wilful, deliberate and premeditated.”

“We consider him to be a flight risk and a danger to the community, so when the bail issue arises, we’re going to argue for a very high bail,” Clark County District Attorney Steve Wolfson told reporters on Sept. 13.

He is being held without bond and faces a life sentence behind bars. His lawyer on Tuesday asked for additional time to prepare for his client’s arraignment, and a local judge rescheduled the hearing for Sept. 20.

German was found dead with multiple stab wounds outside of his northwest valley home on Sept. 3 at around 10:30 a.m.

Police said that video footage from the prior morning showed an individual wearing a long-sleeved orange T-shirt with reflective stripes and a straw hat that covered their face in what was likely done “in an attempt to disguise or conceal his identity.” The individual was carrying a duffle bag.

The individual was seen approaching German’s house and police said that German came out of his home and that “ultimately, an altercation occurred between the suspect and the victim.”

The altercation took place at around 11.16 a.m. and German was stabbed “multiple times”, police said.

Further video surveillance footage showed a maroon GMC Yukon Denali driving around suspiciously in German’s neighborhood on the morning of the murder and prior to the murder.

The suspect in the orange shirt had fled in the vehicle after the time of the murder, police said. The vehicle matched the description of a car that was registered to Telles’ wife.

Law enforcement officials said they had identified Telles as a potential suspect early on because he had been the subject of multiple articles that German, 69, had written about him.

German had reported on Telles for months and was working on a story about him in the week leading up to this death, according to the Las Vegas Review-Journal.

Articles written by German exposed his “potential wrongdoings” police said. They contributed to Teller’s reelection loss in June, according to the publication.

“Telles was upset about articles that were being written by German as an investigative journalist that exposed potential wrongdoing, and Telles has publicly expressed his issues with that reporting,” Koren said during Thursday’s press conference.

Telles, who lost reelection in June, had spoken publically about his dislike of German on Twitter. He had also denied the reports, the Review-Journal said.

In June, he tweeted: “Looking forward to lying smear piece #4 by @JGermanRJ. #onetrickpony I think he’s mad that I haven’t crawled into a hole and died.”

“The arrest of Robert Telles is at once an enormous relief and an outrage for the Review-Journal newsroom,” Executive Editor of the Las Vegas Review-Journal Glenn Cook said in a statement. “We are relieved Telles is in custody and outraged that a colleague appears to have been killed for reporting on an elected official.

“Journalists can’t do the important work our communities require if they are afraid a presentation of facts could lead to violent retribution. We thank Las Vegas police for their urgency and hard work and for immediately recognizing the terrible significance of Jeff’s killing. Now, hopefully, the Review-Journal, the German family, and Jeff’s many friends can begin the process of mourning and honoring a great man and a brave reporter.”

Telles’ defense attorney did not respond to a request for comment.