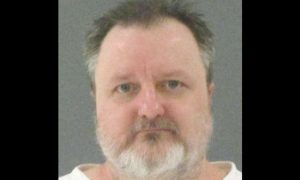 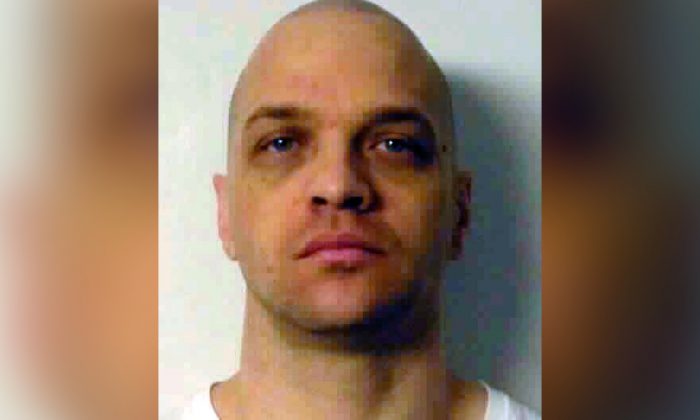 Death row inmate Scott Raymond Dozier, who was convicted in 2007 of robbing, killing, and dismembering a 22-year-old man in Las Vegas, and was convicted in Arizona in 2005 of another murder and dismemberment near Phoenix, was found dead in his cell. (Nevada Department of Corrections/AP)
US News

Nevada Inmate Whose Execution Called Off Found Dead in Cell

LAS VEGAS—A twice-convicted murderer who had repeatedly said he wanted to die by lethal injection was found dead in his death row prison cell from an apparent hanging, officials said on Jan. 5.

Dozier had said repeatedly he wanted to die rather than live the rest of his life in prison. Nevada officials said he tried to kill himself several times after two scheduled lethal injections were postponed.

“I’ve been very clear about my desire to be executed … even if suffering is inevitable,” Dozier said in a handwritten note to a state court judge who postponed his execution in November 2017 over concerns the untried drug regimen could leave him suffocating, conscious, and unable to move.

“I’ve been very clear about my desire to be executed … even if suffering is inevitable.”
– Scott Raymond Dozier https://t.co/2ZweJRKVvx

“Just get it done, just do it effectively and stop fighting about it,” the frustrated inmate told The Associated Press in a telephone interview last August, a month after a different judge stopped his execution at nearly the final hour.

But his bid to become the first Nevada inmate put to death since 2006 was called off twice amid court fights over a three-drug combination that had never been used in the United States: the sedative midazolam, the powerful opioid fentanyl, and a muscle-paralyzing agent called cisatracurium.

The starts and stops in Dozier’s case propelled Nevada to the top of a national debate about the death penalty and shed light on extraordinary efforts some states take to try to obtain drugs from pharmaceutical companies that insist they don’t want their products used for executions.

Dozier gave up appeals for the death sentence he received in 2007 for separate killings of methamphetamine drug trade associates in 2002 in Phoenix and Las Vegas.

But he allowed federal public defenders to challenge on his behalf the method that state officials planned to use.

Those advocates argued that his lethal injection could be less humane than putting down a pet.

Drug companies joined the fight—with cases still pending before state courts and the Nevada Supreme Court. They argue their products should not be used in an execution.

Nevada has drawn backing in the state high court fight from 15 of the 30 other states with capital punishment. Friend-of-the-court briefs argue that harassment from advocacy groups and threats of company boycotts are keeping prison officials from enforcing the will of voters in states that have the death penalty.

Dozier, meanwhile, made it clear that he didn’t like legal limbo.

Last month, state lawyers revealed in a separate federal lawsuit over Dozier’s treatment behind bars that he had tried several methods to kill himself in recent months, including attempting to obtain drops of a deadly drug on a piece of paper sent through prison mail.

The filings were in a lawsuit that challenged Dozier’s housing on suicide watch in an isolation cell.

The state insisted the isolation was to protect Dozier from self-harm, but his lawyers argued he was deteriorating due to unconstitutional treatment. They said he was denied prison yard recreation time and the ability to read, communicate with his family, or effectively consult with legal counsel.

Dozier’s lawyers also revealed that he apparently cut his neck and wrist with a razor in October.

Prison officials reported that Dozier somehow obtained razor blades behind bars and that they had intercepted mail from Dozier’s sister with instructions on how to cut the jugular vein in his neck.

Dozier was not on suicide watch Saturday, Santina said. He was found at 4:35 p.m. at the prison in Ely, about 250 miles north of Las Vegas.

The prison’s spokeswoman said she didn’t immediately know when Dozier had last been seen by guards.

Santina said that would be part of the investigations by the department’s inspector general and White Pine County sheriff’s office.