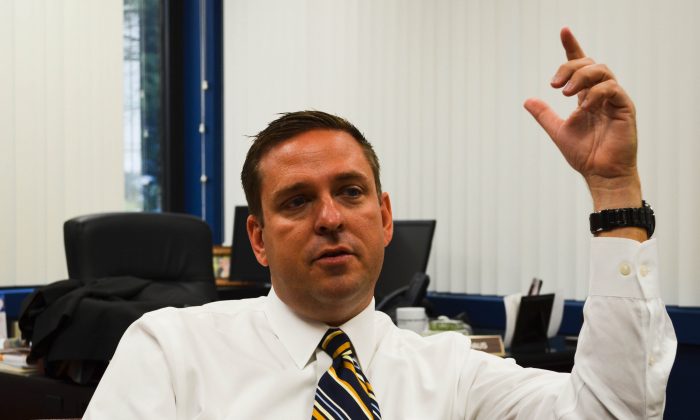 GOSHEN—Orange County Executive Steven M. Neuhaus is urging the Town of Monroe Board to wait until new board members take office in January of 2016 to vote on proposed zoning amendments and released a critical analysis of them on Dec. 15. The county Planning Department performed a review of the proposed amendments and found them deficient in many areas.

“Given the fact that the Planning Department has completed its review and has serious concerns, along with the fact that a new board takes office in less than two weeks, I feel the prudent and responsible course of action would be to wait and let the new town board decide upon taking office in January,” Neuhaus said.

The county’s seven-page report notes, among other things:

“The Town of Monroe has been engaged for over six years in changes to their zoning code,” Church said. “From a planning review standpoint, however, there are too many other questions that are left unanswered. We would encourage the new Town Board to address them, conduct another public hearing, and only then take appropriate action, which hopefully the people most affected by the land use laws support.”

With the county’s formal censure, the vote would require a supermajority—four out the five board members—to pass the amendments, rather than a simple majority vote (three out of five).

“While we support all municipalities in keeping their codes up to date, this specific proposal has too many flaws. We recommend this not be approved allowing the public more time for comment and a newly-seated Town Board the chance to fix the flaws,” Church said.

The Monroe Town Board has scheduled a meeting to discuss the final environmental impact statement for proposed Local Law #4 revisions of Chapter 57 on Dec. 18 at 3:30 p.m. at the Town of Monroe Arts and Civic Center.

Doles said he heard strong views from the 19 residents who spoke at the board’s public hearing. “I appreciate the input on revising the comprehensive plan and a thorough review of the Chapter 57 zoning code,” he said.

Doles did, however, vote with Councilmen Dan Burke and Gerard McQuade Jr. not to extend the public comment period past Dec. 14 on the draft environmental review of Revised Chapter 57 Zoning.

About 140 people, many wearing red T-shirts with the phrase “We Are Not Puppies,” nearly filled the theater where the town board met. the slogan refers to a comment caught on videotape at the end of the Nov. 16 town board meeting of Burke saying, “This is how you train puppies.” Other signs read: “We the people” and “Monroe matters; resign now.”

In her remarks at the hearing, Emily Convers, chairwoman of United Monroe said, “Some of us may support a moratorium [on public comments], but not now and not on our dime.”