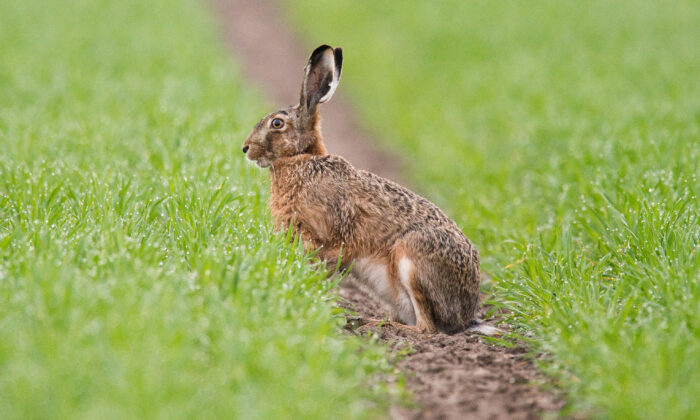 A hare sitting on a field in Algermissen near Hanover, northwestern Germany on April 10, 2019. (Moritz Frankenberg/DPA/AFP via Getty Images)
Social Issues

Chinese authorities have confirmed in the past week that three people were diagnosed with the plague. However, netizens believe that there could be more cases as the contagious disease could have spread, and that authorities are covering up evidence.

The latest patient diagnosed with a form of plague was reported to have contracted the illness after consuming a wild hare. He then travelled by train after he showed symptoms of the disease. The patient may have infected those who he came into close proximity with while he travelled.

Radio Free Asia (RFA) interviewed local people and reported on Nov. 18 that the patient is a 55-year-old man.

“They [a group of hunters] hunted a wild hare and consumed the meat,” local herder Nuomen Da told RFA. “The patient is the one who skinned the hare. The others [who ate the meat] are in good health condition.”

People can contract bubonic or septicemic plague from being bitten by a rodent flea that is carrying the plague bacterium or by handling an animal infected with the plague.

The hare may have carried the disease, which may have spread the bacterium, Yersinia pestis.

Nuomen said the man travelled by train after he had a fever, the preliminary symptom of bubonic plague.

“We don’t know where he visited on that trip,” Nuomen added.

The official information from the local government of Inner Mongolia said the patient is from the Bayin Tara Sumu Quarry in Xianghuangqi, in the Xilin Gol region of Inner Mongolia. He consumed the hare meat on Nov. 5, and was later diagnosed on Nov. 16.

The government quarantined 28 people who came into close contact with the patient and none of them reported the symptoms.

On Nov. 12, a husband and wife from Inner Mongolia were diagnosed with pneumonic plague at a Beijing hospital.

Bubonic and pneumonic are two clinical forms of the plague. The pneumonic strain can also spread much faster because it can be transmitted from an infected human to many healthy humans through inhalation of respiratory droplets due to coughing and sneezing, according to the World Health Organization (WHO). An infected individual taking a train could infect other passengers.

Infected individuals can develop symptoms after an incubation period of one to seven days. The untreated case-fatality ratio for more common bubonic plague transmitted from small mammals and their fleas is between 30 to 60 percent, according to the WHO.

Chinese state-run media Beijing News reported on Nov. 18 that it received confirmation from the Heilongjiang Provincial government office in Beijing that the seven people who had been quarantined since Nov. 14 were released. One of the people had symptoms of an infectious disease, but authorities later said that it was a different disease from the plague.

Netizens spread the incident by posting a leaked document online from the Heilongjiang Provincial government office in Beijing. Seven people at Heilongjiang Hotel in Beijing were quarantined—five were guests who occupied two rooms on the 8th floor of the hotel, and the other two were staff who served the guests. One of the hotel guests tested positive for an infectious disease, which could have been a type of plague, and authorities were afraid the disease could have spread to the other six people who were in close proximity. The document stated that on Nov. 14, medical experts from the Beijing Xicheng District Disease Prevention and Control Center went into the hotel and quarantined five people from the group. The other two were quarantined at a hospital in Beijing.

China has confirmed that three people were diagnosed with the plague within four days this month.

The plague was known as the “Black Death” in Europe and killed more than 50 million people in Europe in the 14th century. In recent decades, the plague is rarely seen in developed countries, but the Chinese people in the mainland are afraid that the plague could turn into an epidemic because the government will hide any evidence and censor the information instead of acting swiftly to stop the spread of the disease.

Since the three patients were diagnosed and treated at Chaoyang Hospital and Beijing Ditan Hospital, Beijing netizens had spread insider information claiming that the Beijing Children’s Hospital and Xuanwu Hospital, also in Beijing, had received patients infected by the plague.

On Nov. 17, Chinese netizens cautioned that people from the southern parts of the country should avoid traveling to the north where new plague cases were discovered.

Beijing officials did not verify the information and dismissed them as rumors and said only three people were diagnosed with the plague.

For many Chinese people in the mainland, the recent plague cases may remind them of the SARS (severe acute respiratory syndrome) epidemic in 2003, which began in November 2002. The discovery of SARS and all related information was censored by the Chinese regime until February 2003 when hundreds of people were already infected with the disease. People in and outside of China did not know about the potential risk of the disease, and as a result, SARS spread to other countries and within China quickly.