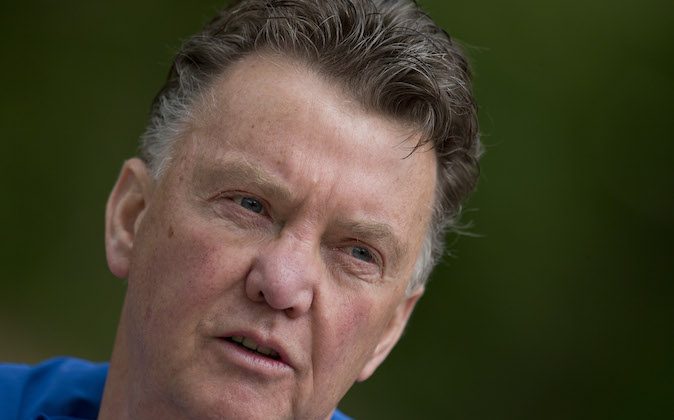 Louis van Gaal, coach of the Dutch national soccer team walks towards the mixed zone after a team training in Hoenderloo, eastern Netherlands, Thursday, May 15, 2014. The 62-year-old coach, who is widely expected to be the manager of Manchester United next season, has been experimenting in recent days with a new formation which he says may sound more defensive, but will be executed according to the "Dutch school" of attacking football. (AP Photo/Peter Dejong)
Soccer

The Netherlands vs Ecuador soccer international friendly match is set for Saturday, May 17.

The game will be broadcast on ESPN Deportes and ESPN3 in the United States.

Live stream is available on WatchESPN.

Here is an AP article on Netherlands’ World Cup team.

HOENDERLOO, Netherlands— Louis van Gaal’s Netherlands team will likely play with five defenders at the World Cup, in a departure from his preferred 4-3-3 system that’s been forced on him by the season-ending injury to key midfielder Kevin Strootman.

The AS Roma star injured his left knee in March, ruling him out of the tournament in Brazil. Van Gaal said Tuesday that “we do not have another Kevin Strootman in the Netherlands.”

The 62-year-old coach, who is widely expected to be the manager of Manchester United next season, has been experimenting in recent days with a new formation which he says may sound more defensive — but will be executed according to the “Dutch school” of attacking football.

That comment is likely an attempt to allay fears of Dutch fans who watched their greatest teams use the hallowed 4-3-3 system as the foundation of their “total football” philosophy.

Van Gaal later named a preliminary 30-man squad Tuesday night that included four Feyenoord defenders who play the 5-3-2 system he is expected to use in Brazil.

One of the biggest surprises was the absence of Paris Saint-Germain right back Gregory van der Wiel, a starter in the World Cup final four years ago. The squad, which has to be reduced to 23 players, includes six players from the 2010 World Cup final starting lineup.

Van Gaal acknowledged it is a gamble trying to get many of his players to adopt the new system so soon before a major tournament. Most Dutch footballers grow up learning the 4-3-3 system and it has been the national team’s preferred way of playing for years.

He added that he is not wedded to the new system and could easily revert to 4-3-3 during the tournament. He is expected to test the new system Saturday night in a friendly against Ecuador in Amsterdam.

“It has to have a chance of succeeding,” he said. “This coach wants to win.”

Van Gaal has been working for a week with a group of potential World Cup squad members, mainly defenders, while he waits for the seasons of overseas stars like Robin van Persie and Arjen Robben to finish.

He said Van Persie and Robben are his two captains and are guaranteed a place in his starting lineup. He added that he has “more than five names” for his starting lineup for the Netherlands highly-charged World Cup opener on June 13 in Salvador, a repeat of the ill-tempered 2010 World Cup final which Spain won 1-0 in extra time.

Van Gaal, who declined to comment on his possible move to Manchester, named a preliminary squad that mixed inexperience — six players with only one international to their name and three making their debuts in the full international squad.