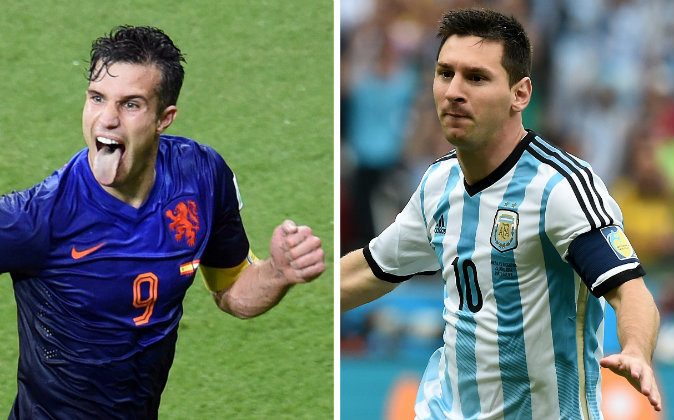 Van Persie was a doubt to start today’s match owing to a stomach problem. The 30-year-old striker, who plays for Manchester United at the club level, trained separately on Tuesday.

Vlaar injured his knee in Netherlands’ quarter final match against Costa Rica, but he returned to full training on Tuesday and will start today.

De Jong injured his groin against Mexico and was given two to four weeks to recover. Given his inclusion, the 29-year-old midfielder clearly has recovered ahead of projections.

Meanwhile, Marcos Rojo has been restored to Argentina’s starting eleven after missing out on the quarter final due to a suspension for having picked up two yellow cards.

See the teams below.

BELO HORIZONTE, Brazil (AP) — Brazilians are having a difficult time trying to fathom how it all went wrong so quickly against Germany in the World Cup semifinals.

With the humiliating 7-1 loss still very raw for Brazil supporters, players struggled to find explanations for the country’s worst ever World Cup defeat.

Brazil conceded four goals in a seven-minute span and trailed 5-0 at halftime on Tuesday, and never had a chance to mount a comeback at the Mineirao Stadium.

The dream of playing a home final at the Maracana was obliterated, and players knew they were going down in history for the wrong reasons at their home World Cup.

“We are still trying to understand what happened,” right back Daniel Alves said. “I guess it’s football. In six minutes you can be eliminated and that’s what happened to us.”

Germany scored its first five goals by the 29th minute as Brazil’s defense self-destructed, shocking the crowd at the Mineirao and everyone else watching on television.

“It was a tough day,” Brazil defensive midfielder Luiz Gustavo said. “We started well, with everybody doing what they were supposed to be doing, but then all of a sudden we conceded the goals.”

Tuesday’s result equaled the margin of its previous worst defeat — a 6-0 loss to Uruguay in the South American championship in 1920. It was the worst World Cup loss ever in numbers, and probably nearly as heartbreaking as the home defeat in the 1950 tournament, the so-called Maracanazo.

“It’s difficult to explain,” Oscar said. “I don’t know what to say. All we can do is apologize. Nobody expected this.”

Although no one was making excuses, Brazil played without star striker Neymar because of an injury and captain Thiago Silva because of a suspension.

Silva said it was “almost impossible to explain what happened. It wasn’t the Brazilian national team that we are used to seeing.”

Bernard, who took Neymar’s spot in the starting lineup, said “nothing went our away. It was atypical.”

Brazil now has to play the third-place match on Saturday in Brasilia against either Argentina or the Netherlands.

Brazilian President Dilma Rousseff said she was “very, very sad” after the loss. Pele said it showed that “football is a box of surprises.”

“Nobody in this world expected this result,” Pele posted on Twitter, already looking forward to the 2018 tournament. “We’ll get the sixth title in Russia. Congratulations to Germany.”

But many of the Brazilian players won’t be back in Russia to try to rebound from the historic home defeat. Only seven players will be 30 years or younger in 2018 — Marcelo, Luiz Gustavo, Paulinho, Willian, Neymar, Oscar and Bernard.

“We know this will be remembered for a long time,” veteran defender Maicon said.

Striker Fred, who struggled the entire tournament and was loudly jeered when he was replaced in the second half on Tuesday, said “our lives will be marked by this.”