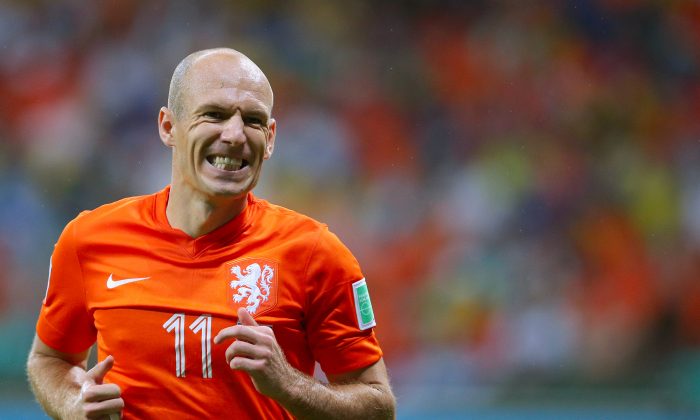 Arjen Robben of the Netherlands looks on during the 2014 FIFA World Cup Brazil Quarter Final match between the Netherlands and Costa Rica at Arena Fonte Nova on July 5, 2014 in Salvador, Brazil. (Dean Mouhtaropoulos/Getty Images)
Soccer

Netherlands and Argentina are set to play in a World Cup 2014 semi final match on Wednesday, July 9.

The game will be broadcast on Canal 7 TV Publica, TyC Sports Argentina, DIRECTV Argentina, and DeporTV in Argentina, as well as Nederland 1 in the Netherlands.

See an Associated Press preview of the match.

Dribblers Messi and Robben Face Off in Semifinal

On Wednesday in Sao Paulo, either one could turn the semifinal with a dazzling turn of pace or a weaving run to propel his team to the final.

The Barcelona star led Argentina through the group stage with four goals. He has also made 180 passes in his five matches so far.

The Dutch have shared the goal-scoring duties more evenly — Robben and Robin van Persie each have three, Memphis Depay has two of the team’s total of 12 — but the Bayern Munich winger’s scintillating sprints with the ball have often been the highlights of Oranje matches.

“We know that we will play against one of the best teams when it comes to counterattacks because of the speed of their men up front,” Argentina midfielder Javier Mascherano said. “So we have to take precautions to not give them the possibility to counterattack, to always be well positioned, to not lose balls unnecessarily in areas where there’s a lot of risk.”

After scoring 10 times in group play, the Netherlands has managed only two in its two knock-out matches and the Dutch will be hoping captain Van Persie regains his touch in front of goal. He looked off the pace and missed an easy chance near the end of regulation time in the quarterfinal against Costa Rica.

The Netherlands will again be without their powerful midfield controller Nigel de Jong, who has a torn groin muscle. A possible replacement, Leroy Fer, is recovering from a hamstring injury and it is not clear if he will be fit for Wednesday’s semifinal at the Itaquerao Stadium.

Argentina will be without Real Madrid winger Angel Di Maria, who limped off in the first half of his country’s quarterfinal win over Belgium with a right thigh injury, but striker Sergio Aguero has been declared fit after recovering from a similar problem.

Di Maria scored the extra-time winner against Switzerland in the second round and set up Gonzalo Higuain’s winning goal in the first half against Belgium on Saturday.

“He’s a good player, but we look at the whole team, not one player,” Netherlands goalkeeper Jasper Cillessen said. “We’re going to watch … how Argentina plays. We’re going to make our plan to beat Argentina.”

Whether that plan again could involve Cillessen being substituted a minute before a penalty shootout and replaced with the more physically imposing Tim Krul — as happened against Costa Rica — remains to be seen.

The move by tactical mastermind Louis van Gaal was the World Cup’s most surprising substitution and one of its most effective as Krul stopped two penalties.

“We are ready for everything,” Krul said. “Hopefully, we don’t need it against Argentina and we can do the job in 90 minutes.”

The two sides have a long World Cup history, including one of the Netherlands’ most heart-breaking losses, in the 1978 final when Rob Rensenbrink’s shot hit the post shortly before full time with the scores level at 1-1. Argentina went on to win 3-1 in extra time.

In 1998, the Dutch led by Guus Hiddink got a measure of revenge when Dennis Bergkamp’s memorable goal knocked Argentina out in the quarterfinals in France.

Cillessen said beating Argentina in Sao Paulo would only be a step on the way to making amends for the 1978 final — one of three the Netherlands has lost, earning the Dutch the title of the best team never to win the World Cup.

“It would be revenge if we win the World Cup,” Cillessen said. “But we have to wait for that. It’s not a final. It’s a semi.”