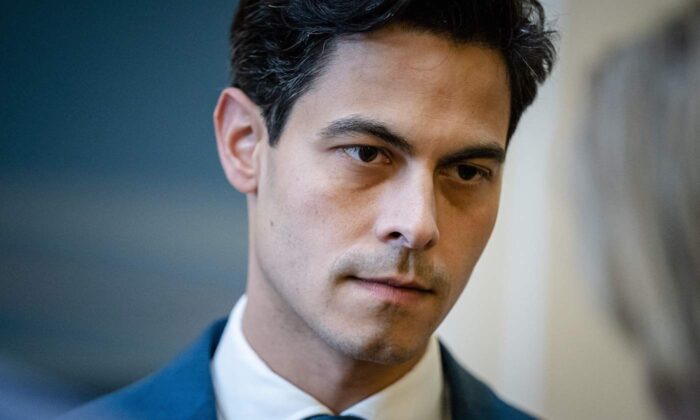 Netherlands Minister for Climate and Energy Rob Jetten after the weekly Council of Ministers at the Binnenhof in The Hague on April 22, 2022. (Bart Maat/ANP/AFP via Getty Images)
Europe

The Netherlands is following in the footsteps of neighboring Germany and lifting a cap on production by coal-fired power stations in an effort to prevent a winter energy crisis amid a drop in gas supplies from Russia.

“Because the risk of gas shortages has increased, the cabinet has decided today to withdraw the production limitation for coal-fired power stations for 2022 to 2024 with immediate effect,” climate and energy minister Rob Jetten said in a statement announcing the move on Monday.

“This means that the coal-fired power stations are allowed to produce at full capacity again so that less gas is needed for the production of electricity by gas-fired power stations. This reduces the risk of gas shortages and makes it easier to fill the gas storage facilities in the Netherlands and Europe.”

The Netherlands is in the first phase of a gas crisis, according to Jetten, which has prompted the government to initiate its Gas Protection and Recovery Plan.

Jetten said the overall aim of removing the restrictions on coal-fired power stations is to fill gas storage facilities across the Netherlands with more than had previously been agreed by Europe to ensure that plenty of gas is saved ahead of the winter.

The Netherlands capped its coal-fired power plant production at just 35 percent of capacity as it seeks to transition away from higher carbon dioxide emissions to clearer energy.

Its removal of the cap on coal-fired energy production is expected to save 2 billion cubic meters (bcm) of gas use per year but Jetten noted that the Netherlands would still meet its 2030 climate goals, which included phasing out its last four coal-fired power plants by 2030.

The Dutch cabinet will announce additional measures aimed at reducing the extra CO2 to offset emissions from coal-fired power stations in the near future.

In the short-term, officials are working on a “temporary gas-saving tender that will give large gas consumers a financial incentive to reduce their gas consumption,” Jetten said.

Back in May Russia’s Gazprom cut off gas supplies to Dutch gas trader GasTerra after it had failed to pay for deliveries in Russian rubles as requested by Russian President Vladimir Putin in March.

That decision means Gazprom will not deliver some 2 billion cubic meters of gas to the Netherlands between now through Oct. 1, when its contract with GasTerra was set to end. However, Jetten stressed on Monday that there was currently no shortage of gas in the Netherlands.

“There are currently no acute gas shortages in the Netherlands, but the declining gas supplies could have consequences,” the climate and energy minister said.

“With the declaration of the first level of a gas crisis, gas companies must provide additional detailed information on current gas supplies and stocks on a daily basis. This will enable the government to monitor the gas market even more closely and immediately take additional measures if the situation so requires.”

The latest decision by the Dutch government comes just a day after Germany’s economy minister Robert Habeck said that the country will limit the use of natural gas for electricity production and instead increase coal burning to compensate. The move comes amid decreased supplies from Russia and fears over potential shortages.

Elsewhere on Monday, the Dutch government also announced plans to produce 2.8 billion bcm of gas from the Groningen gas field in the year ending October 2023, scaling back on the 4.5 bcm in the current production year.

“Due to the uncertain geopolitical developments, State Secretary Vijlbrief has decided not to close any wells definitively this year,” the government said.