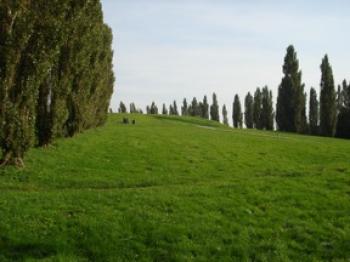 Global Dispatches: The Netherlands—A Stroll Through A Dutch Park

Peter Valk
biggersmaller
Print
WOERDEN, The Netherlands—I used to think that I was born in a democratic, liberal country. But every time I go for a stroll around the park or take the train, I feel it is not so. It is as if there are invisible social laws in this country more binding than those written in black and white.

For one thing, no one shall go for a walk in the park without a reason. That is why people have dogs here. They are like the Dutch pedestrians’ driving license. If you do not have a dog, consider borrowing one. Otherwise take a tennis racket, fishing rod, or a drum with you to the park. That way it will be clear to anyone what you intend to do. There must be a purpose to every stroll, and even if the purpose is relaxation or leisure, you must make this absolutely clear.

Dutch people have opinions about everything. Likewise they will have an opinion about each other, and when they can’t figure someone out, they will be forced to produce one—which usually isn’t good. The famous Dutch soccer player Dennis Bergkamp, whom played most of his career in England, called Holland an "opinion factory.”

Another point to pay attention to is how to behave when you come across another pedestrian along the way. In Dutch parks, people sometimes greet each other and sometimes not. There are no rules for that except one: you must feel thoroughly uneasy about it. So when you are taking your stroll, as soon as you see another person moving slowly toward you, you should start the process of pondering whether or not to greet that person. Not to mention the tension that comes from how to greet. For me that usually results in a weird “hello.”

With acquaintances you do not have that problem; you must greet them. But you are nonetheless faced with similar tension in deciding whether or not you should strike up a conversation. The amount of tension involved in both cases is the same, so that evens out perfectly.

I am actually an authority on this topic as I happen to live in the most average city of the Netherlands—average in the sense of having an average number of people, trucks, parks, semidetached houses, pastry shops, criminals, dogs, and so on.

Taking the train, something often done by your average Dutchman, presents a different set of issues. On the train, bringing a dog won’t work, so this time you are on your own. On a train, you can be confronted with people sitting right there, not passing by. Social regulations are different from parks since you should definitely not strike up a casual conversation with other passengers, lest you want them to think you are drunk or mad.

It is permissible and encouraged, however, to firmly demand from the persons near you that they turn down their music or stop talking loudly on their mobile phones. You can find enough people to support you in that, though not necessarily in words or deeds, but certainly in their minds. If it comes to a fight, however, you are on your own again.

Usually the best thing to do is to get yourself a big newspaper, not a tabloid-sized one but a nice big one, and browse through it with average speed and attention. This should safely see you through any Dutch train trip, which cannot take much over two to three hours.

Of course these invisible laws in trains and parks really only count for the Dutch. As a foreigner, you might for the time being, to the extent it’s obvious you are foreign, get away with being a little more spontaneous and free.

Peter Valk
Follow
Peter Valk is a tea expert who has extensively travelled in Asia, interrupted by odd jobs and a short spell of studying anthropology in the Netherlands. In his travels, he steeped himself in Asian culture, learned Chinese, met his wife and found his passion. He has been in tea business over seven years, selling Chinese tea and giving workshops on Chinese tea and culture. Currently, he is living in the Netherlands where he is busily but mostly happily making up for his travel time.