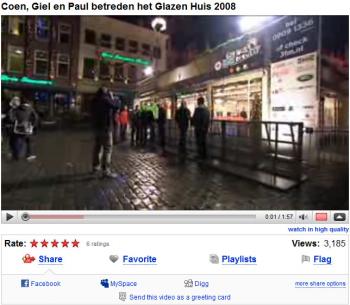 Screenshot of a video which shows the glass house in the middle of Breda where the DJs stayed to raise money. (Youtube image)
Europe

Epoch Times Staff
View profile
Follow
biggersmaller
Print
AMSTERDAM, Netherlands—In the spirit of Christmas charity, three DJs from 3FM, a popular Dutch radio station, were locked in a house made of glass from Dec. 19-24 in the city of Breda, where they abstained from food to raise money for aiding refugees.

Minister for Development Cooperation, Bert Koeners, was part of the opening ceremony for the event. The DJs took requests for songs and had a slot where the public could donate money.

This is the fifth time that the “Serious Request” event has been organised and broadcast. It started as a promotional idea for 3FM to promote its programming in 2004, though the terrible hostage drama in Beslan of the same year gave rise to the idea of raising money for charity.

In the end, the Beslan foundation didn't need the money, so the genocide in Darfur became the theme. Three DJ's, including Giel Beelen, went inside a Glass House, making non-stop radio for six days. Money is not only donated directly into the box, but through the internet. Public organisations, celebrities, and governments also get involved.

Winners of competitions to raise the most money within a fixed period of time, for example, get a treat by staying a night in the glass house. One woman from Breda threw a party and raised 8,100 euros. Several famous Dutch artists also made contributions.

Several years ago the government also began joining in, matching donations dollar for dollar. This year the condition was that the other donations reach 2.5 million euros before they will match it. Minister Koenders said: “We do not want to play Santa Claus, but want to motivate people.”

This year the target was reached, the government threw in 2.5 million, and the total amount raised was over 5.5 million euro (over US$ 7million).