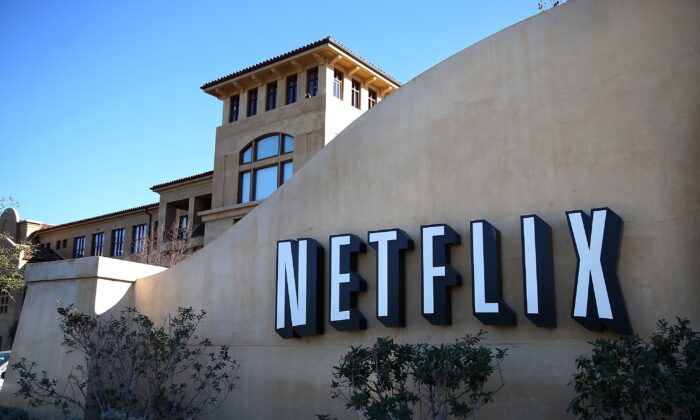 The Netflix sign is seen at the company’s headquarters in Los Gatos, Calif., in a file photo. (Justin Sullivan/Getty Images)
Business & Economy

All eyes were on Walt Disney Co and its streaming platform Disney+ on Friday as the company celebrated its two-year anniversary of the popular streaming service. But, two other companies may have stolen the spotlight with new streaming records over the weekend.

Disney celebrated the two-year anniversary of Disney+ with a handful of new releases added on Friday along with new company announcements of what’s to come.

The company added “Jungle Cruise” and “Shang-Chi and the Legend of the Ten Rings” to the streaming platform, available free for the first time.

“Shang-Chi and the Legend of the Ten Rings” was a highly anticipated theatrical release with part of the record-breaking numbers coming from it not being offered on the streaming platform.

“Jungle Cruise” was a Premier Access title for Disney+ subscribers, offered for a $29.99 price to subscribers while the movie was also released in theaters.

Disney did not disclose numbers from the weekend with the two new Disney+ releases.

A new film starring Tom Hanks was released for subscribers of Apple TV+ over the weekend. “Finch” is a sci-fi drama starring Hanks in a post-apocalyptic world with his dog. A robot companion is created to keep him company and protect his dog, a storyline many see similarities to the Hanks’ hit “Cast Away.”

Apple Inc didn’t share specific numbers but said “Finch” was its largest opening weekend ever on Apple TV+, according to Deadline. The film was released in 100 countries.

The strong reception to “Finch” could be important to Apple as it marks the second of three exclusive projects from Hanks. “Greyhound,” a World War II thriller saw strong numbers for Apple TV+ and was the record holder prior to “Finch.”

Hanks has a World War II series in the works called “Masters of the Air” with producer Steven Spielberg and could be among the most highly anticipated Apple TV+ projects ever.

Other titles highlighted by Deadline include “Swan Song,” the Joel Coen directed “The Tragedy of Macbeth,” a Will Smith movie called “Emancipation” and the Martin Scorsese-directed “Killers of the Flower Moon,” which stars Leonardo DiCaprio and Robert De Niro.

Apple has attracted fans to its streaming platform with award-winning series such as “Ted Lasso” and “The Morning Show.” On Friday, the streamer added “The Shrink Next Door,” starring Will Ferrell and Paul Rudd.

Movie and television fans may not be able to ignore the strong content lineup of Apple in the future if the hits keep coming.

Dating back to 2007, Netflix Inc NFLX -0.48 percent has offered movies and shows available to be streamed at home. The streaming giant has made a big push into acquiring top films and shows, while also building out an impressive library of original and exclusive titles.

“Red Notice” was released Friday starring Dwayne Johnson, Ryan Reynolds and Gal Gadot. The movie was the most expensive movie ever produced by Netflix.

It was reported over the weekend, by Reynolds himself, that the movie turned in the best debut day viewership in Netflix history.

A tweet from Reynolds highlighted the record and also hinted at a sequel, which shouldn’t come as a big surprise to anyone who watched “Red Notice.”

“I think there is … with Seven Bucks Productions, it’s almost like ‘franchise’ is just part of the conversation,” Red Notice producer Dany Garcia told Variety prior to the film’s release. Netflix has not confirmed a sequel and is taking a wait-and-see approach.

Netflix has enjoyed success with hit shows and movies and “Red Notice” adds to that library of content.

The three stars were reported to enjoy a huge payday, which could make this movie another test for the streamer to see if it is worth it to shell out the big bucks to create ensemble casts that will break viewership figures and bring new audiences to Netflix.

The new movie and a strong upcoming slate of series returning, including “Tiger King,” “The Witcher” and “Stranger Things,” that could help tide fans over until the release of “Squid Game 2.”