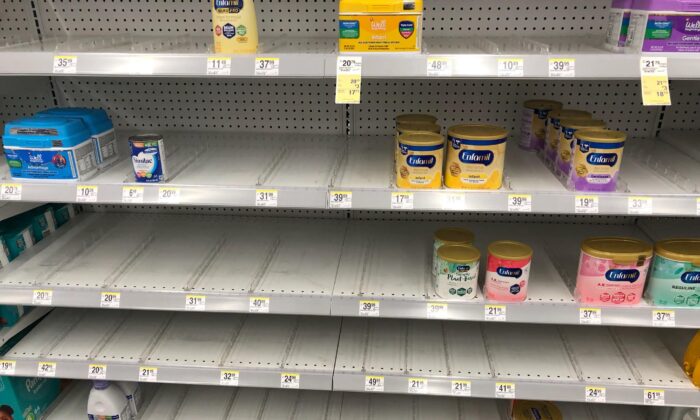 This empty shelf at a Walgreens store in Superior, Wis., is a sight that greets many parents across the country as the nationwide baby formula shortage continues. (Courtesy of Jessica Johnson)
Companies

Nestle SA is airlifting baby formula to the United States from Europe in an effort to ease nationwide shortages, the company said on May 17.

The Swiss multinational food and drink manufacturer is flying Gerber baby food formula supplies to the United States from the Netherlands and Alfamino baby formula from Switzerland.

“We prioritized these products because they serve a critical medical purpose as they are for babies with cow’s milk protein allergies,” the company said in an emailed statement to Reuters.

“Both products were already being imported but we moved shipments up and rushed via air to help fill immediate needs.”

The Epoch Times has contacted Nestle SA for comment.

The situation has been further exacerbated by a recall from Abbott Nutrition following reports of four infants getting sick after allegedly consuming the products.

The products were manufactured at the Abbott plant in Sturgis, Michigan. The U.S. Food and Drug Administration (FDA) promptly shut down the facility after receiving consumer complaints, but officials announced on May 16 that the FDA reached an agreement with Abbott to reopen the plant.

“This is a major step toward re-opening our Sturgis facility so we can ease the nationwide formula shortage,” Abbott CEO Robert Ford said in a statement. “We look forward to working with the FDA to quickly and safely re-open the facility.”

Abbott Laboratories said on May 13 that it has flown millions of baby formula cans to the United States from its facility in Cootehill, Ireland, to help deal with shortages.

That facility is also registered with the FDA.

“We know that the recall has worsened the industry-wide infant formula shortage, and we have been working to get as much product into the hands of parents as we can,” an Abbott spokesperson said in a statement.

A Danone spokesperson told BNN Bloomberg that “high demand has impacted our formula availability” and that the company’s manufacturing facility is “running at maximum capacity and we are prioritizing production of our top-selling infant formulas.”

The spokesperson did not provide further details regarding whether the company was shipping any products from other regions or which formulas it was prioritizing.

The Biden administration has taken other steps to try to combat the shortages, including cutting red tape to make it easier to import formulas from overseas and get them onto U.S. shelves, and offering support to manufacturers to speed up production and distribution.

However, some lawmakers, including Rep. Elise Stefanik (R-N.Y.), have criticized the administration for its lack of action.

“I wrote a letter in February, reaching out to the FDA demanding, ‘What is your plan?’” Stefanik told NTD’s “Capitol Report on May 13. “We got no substantive response.”