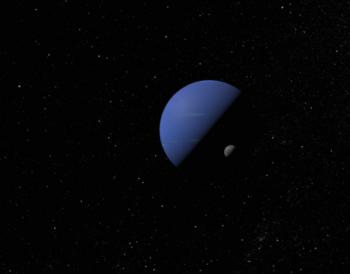 Neptune will finally complete its first full orbit of the sun since it was discovered in 1846, approximately one year from now, according to NASA estimates. (Photos.com)
Science

Neptune One Year Away From First Complete Orbit Since Discovery

Madeline Liu
View profile
Follow
biggersmaller
Print
Neptune will finally complete its first full orbit of the sun since it was discovered in 1846—approximately one year from now, according to NASA estimates.

A recent Space.com article incorrectly slated the completion of Neptune’s orbit for August 20, 2010, bringing the topic into the public arena ahead of time. The story has since been updated to reflect the actual date exactly a year later.

Neptune is a gas planet and farthest from the sun. It appears very tiny using a normal telescope, typically requiring observers to use sophisticated binoculars or telescopes to view it. Uranus is usually easier to find using the naked eye.

To the extra keen observer, Neptune should be visible when it completes its orbit on August 20, 2011. “Look for the large but faint triangle of Capricornus, to the left of Sagittarius and the Milky Way. The two stars at the left end of the triangle point the way to Neptune, just a little bit short of and above the star Iota in the neighboring constellation Aquarius," advised Space.com.

Like Saturn, Neptune also has rings, but they are very faint compared to Saturn’s signature rings. Neptune has very high winds which can travel at supersonic speeds, and has 13 moons.

The planet has an interesting history. In 1781, Uranus was discovered by Sir William Herschel. However astronomers were puzzled by Uranus’ position, and predicted gravity from another planet was interfering with Uranus’ motion.

Then, in the mid-1840s, Englishman John Couch Adams and Frenchman Urbain Le Verrier pinpointed this new planet's location. However, most astronomers still did not take any notice.

Finally, on Sept. 23, 1846, German astronomer Johann Galle found the planet when observing this predicted location in space. He shares the honor of discovering Neptune with Adams and Verrier.

{etRelate 40952}However, Galle was not really the first person to have found Neptune, but rather the first to realise what he had found. Galileo Galilei mistook Neptune as a star twice on Dec. 28, 1612 and Jan.27, 1613, during his studies of the night sky.