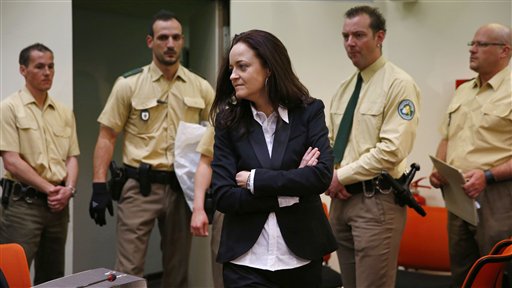 Beate Zschaepe, member of the neo-Nazi group National Socialist Underground (NSU) enters the court room before the start of her trial in Munich, southern Germany, Monday, May 6, 2013. The highest-profile neo-Nazi murder trial in Germany in decades opened Monday amid tight security and intense media interest, with the five accused appearing in public for the first time since their arrest more than a year ago. (AP Photo/Matthias Schrader)
Europe

Neo-Nazi murder trial: The trail for an alleged neo-Nazi began on May 6.

MUNICH—An alleged German neo-Nazi accused of involvement in a 10-person killing spree appeared confident and calm Monday as her murder trial opened amid tight security, intense media interest and an immediate request by the defense for a new judge.

Beate Zschaepe — said to be the sole surviving member of a gang behind the murders — entered the court in a dark suit, her arms folded, before turning her back to the cameras and appearing to joke with her lawyers.

The hearing began with two motions from the defense lawyers alleging that the presiding judge was biased. Judge Manfred Goetzl put proceedings on hold until May 14 to consider the defense request that he recuse himself from the trial, which is the highest-profile neo-Nazi murder trial in Germany in decades and could last at least a year.

Zschaepe, 38, is accused by prosecutors of murder for alleged complicity in the killing of eight Turks, a Greek and a policewoman between 2000 and 2007. If convicted, she faces life imprisonment. Four others face lesser charges of assisting the cell.

Zschaepe is also accused of involvement in at least two bombings and 15 bank robberies allegedly carried out by her accomplices Uwe Mundlos and Uwe Boenhardt, who died in an apparent murder-suicide in November 2011.

Prosecutors allege the trio had formed the self-styled National Socialist Underground after evading arrest on lesser charges in 1998 and managed to remain largely off the authorities’ radar for the following 13 years despite committing a string of violence crimes.

Hundreds of reporters lined up outside the Munich courthouse in the hope of gaining one of the few available seats in the packed courtroom. Police erected security barriers in anticipation of possible protests by far-right and far-left extremist groups.

Aside from Zschaepe, the four other defendants are:

— Ralf Wohlleben, 38, and Carsten Schultze, 33, are accused of being accessories to murder in the killing of the nine male victims. Prosecutors allege that they supplied the trio with the handgun and silencer used in the killings. Wohlleben was once a member of the far-right National Democratic Party, which has seats in two state parliaments in eastern Germany.

— Andre Eminger, 33, is accused of being an accessory in two of the bank robberies and in a 2001 bombing in Cologne. He is also accused of two counts of supporting a terrorist organization.

— Holger Gerlach, 39, is accused of three counts of supporting a terrorist organization.

Like Zschaepe, the co-defendants were known to German authorities before the existence of the NSU — whose name alludes to the official name of Adolf Hitler’s National Socialist German Workers’ Party — came to light.

Many of Germany’s 3 million Turks have asked how the country’s well-funded security services, with their network of informants in the far-right scene, could have overlooked the group’s existence for so long. For years, police suspected the immigrant victims of being involved with foreign gangs linked to gambling and drugs.

Families of those killed and survivors of the bomb attacks in particular have said they are hoping not just for justice, but answers to questions such as how the group chose its victims, none of whom were high-profile targets.

One of Zschaepe’s three lawyers has claimed that his client faces “execution by media.”

Wolfgang Stahl told public broadcaster SWR last week that Zschaepe was being portrayed as “evil incarnate, a murderer, a member of a murder gang, a Nazi bride or a Nazi killer” in a way that could prejudice the trial judges.