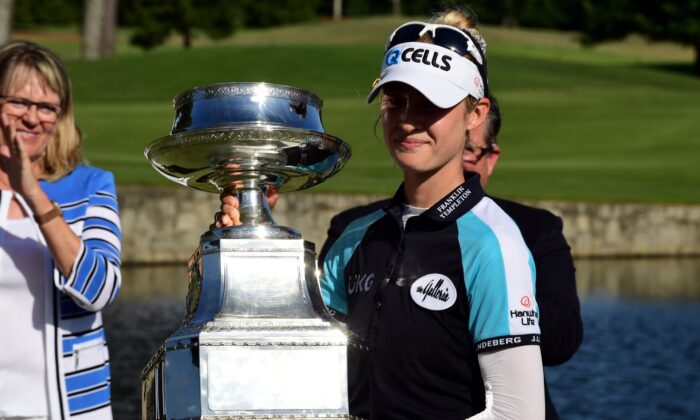 Nelly Korda Vaults to No. 1 in World Rankings

Nelly Korda officially vaulted to No. 1 in the Rolex Women’s World Golf Rankings, following her victory at the Women’s PGA Championship on Sunday.

The top spot is now occupied by somebody from the United States for just the third time ever. Stacy Lewis held the No. 1 spot for a month in 2013 and five months in 2014, while Cristie Kerr led for five weeks in 2010.

“Reaching World No. 1 has always been a goal of mine, and I can’t believe that I’ve actually done it,” the Bradenton, Florida, native said in a release. “The other players who have been No. 1 are incredible and I’m honored to join that list.”

The 22-year-old Korda vaulted past leader Jin Young Ko and Inbee Park, both of South Korea, to take the top spot. Ko was in the No. 1 position since July 28, 2019, a run of 701 days. Park was a previous occupant of the top spot.

Korda also has a victory at the Gainbridge LPGA to give her three wins on the LPGA Tour this year. She leads the LPGA with a 68.857 scoring average.

During the women’s golf event in early August at the Tokyo Olympics, Korda is expected to represent the United States.