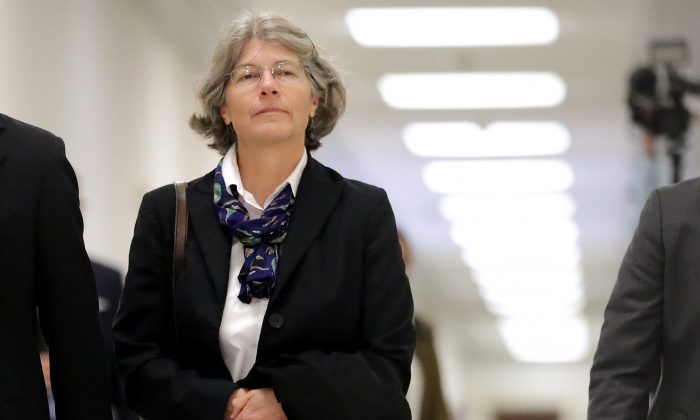 Nellie Ohr arrives for a closed-door interview with investigators from the House Judiciary and Oversight committees on Capitol Hill on Oct. 19, 2018. (Chip Somodevilla/Getty Images)
US News

Nellie Ohr Testimony Confirms Her Work for the CIA

Prior to investigating the Trump campaign for Fusion GPS, Nellie Ohr worked as contractor for the CIA for up to six years
By Jeff Carlson

Nellie Ohr, the wife of former high-ranking Justice Department (DOJ) official Bruce Ohr—both of whom played pivotal roles in the FBI’s investigation into the Trump 2016 presidential campaign—worked for the CIA as an independent contractor for as long as six years.

Ohr was hired as a researcher by Fusion GPS—the company hired by the Clinton campaign and the Democratic National Committee to produce the now-infamous Steele dossier—in 2015.

She conducted open-source research into members of the Trump campaign for Fusion GPS—which describes itself as a commercial research and strategic intelligence firm—that may have been used in the Steele dossier. She also provided her husband with a USB stick containing all her research from her time at Fusion GPS to pass on to the FBI in late 2016 after she had officially left the firm.

Prior to her work for Fusion GPS, Ohr worked for an internal open-source division of the CIA named Open Source Works from 2008 to at least June 2010; it appears likely that she remained in that role until 2014.

According to a transcript of an Oct. 19, 2018, closed-door testimony, which was reviewed by The Epoch Times, Ohr acknowledged to congressional investigators that she worked as an independent contractor for “various agencies in the United States Government.”

Ohr testified that she worked for the CIA’s Open Source Works (OSW) division. She also revealed that prior to her work for the CIA, she worked for Mitre, which is funded by the U.S. government and interacts with various intelligence agencies.

Ms. Ohr: “Starting in 2000, I did some part-time contracting for Mitre, which is a contract –“

Mitre Corp. is a “not-for-profit company that operates multiple federally funded research and development centers (FFRDCs).” In other words, Mitre is a government-funded enterprise that conducts research for the U.S. government.

Of greater interest was Ohr’s employment as an independent contractor for OSW, the CIA’s internal open-source division.

The CIA describes OSW as a division that uses open-source information to produce intelligence products.

“[Open Source Works] was charged by the Director for Intelligence with drawing on language-trained analysts to mine open-source information for new or alternative insights on intelligence issues,” states an unclassified Nov. 16, 2010, CIA report, headlined “Russia: Security Concerns About Iran’s Space Program Growing.”

Ohr told congressional investigators that she began working for Open Source Works in 2008, but provided no time frame for her end date. Her profile on LinkedIn, however, provides some indication that she may have remained employed with Open Source Works through 2014.

From 2000 to 2014, Ohr lists herself on her resume as a “Linguist/Research Analyst – Self-employed.” But she also concurrently lists her 2013-2015 employment with Plessas Experts’ Networks as an “Expert/Content Creator.”

Ohr told congressional investigators that she intentionally didn’t list any agencies on her resume when working as an independent contractor for the U.S. government:

Rep. Meadows: “So I have one follow-up. Have you ever submitted a resume that would list any of those agencies on that resume?”

Rep. Meadows: “So no resume that would indicate that you did work for those agencies on a resume?”

Ms. Ohr: “My resume stated that I was an independent contractor doing work in support of U.S. Government.”

Rep. Meadows: “But normally there is a sentence or two right after it on what they did. And so what I’m saying is, did — in those resumes, and for example, like with Mitre, we do work with the CIA, NSA whoever –“

Ms. Ohr: “I do not explicitly name those agencies in a resume.”

Listed on the same page were her husband, Bruce Ohr, and Glenn Simpson, who was, at the time, a “Senior Fellow, International Assessment and Strategy Center.”

As the report notes, “In January of 2010, the International Center of the National Institute of Justice (NIJ) assembled international experts and practitioners to assess the state of research on international organized crime (IOC).” It may have been here that Bruce and Nellie Ohr first met Simpson.

Beginning in September 2015, Ohr began working for Fusion GPS. Ohr told investigators that she “read an article in the paper that mentioned Glenn Simpson. And I remembered because he had been a Wall Street Journal reporter, working on things like Russian crime and corruption, so I recognized the name. I was underemployed at that time and I was looking for opportunities.”

When later questioned as to her previous knowledge of Simpson, Ohr stated, “I had been at a conference that he was at. I don’t recall directly talking with him at that conference, and I don’t know whether he knew who, you know, who I was other than the fact that I attended that conference.”

Ohr acknowledged to congressional investigators that Simpson was acquainted with her husband:

Rep. Jordan: “And did he know at the time that he hired you that your husband worked for the Department of Justice?”

Rep. Jordan: “Was Glenn Simpson acquainted with your husband, Bruce? Did they have a friendship or relationship prior to you going to work for Fusion?”

Ms. Ohr: “They were acquainted, yes.”

In court documents filed on Dec. 12, 2017, Simpson referred to Ohr as a “former government official expert.” Simpson said Ohr was hired “to help our company with its research and analysis of Mr. Trump.”

“I was asked to research Trump’s family broadly in connection with any – any Russian connections,” Ohr said.

According to her online resume, Ohr currently works for Accenture iDefense. The cyber threat intelligence business iDefense Security Intelligence Services was acquired by Accenture in early 2017. On the presentation schedule for an October 2017 summit of the Financial Services–Information Sharing and Analysis Center (FS–ISAC), Ohr listed herself as working for Accenture Security.

Along with Byron Collie of Goldman Sachs, Ohr gave a presentation at the FS–ISAC summit titled “Ties Between Government Intelligence Services and Cyber Criminals—Closer Than You Think?”

Like Ohr, Brennan played a key role in the scandal that’s come to be known as Spygate, in which politicized federal agencies launched investigations into members of the Trump campaign, based on the false premise that they colluded with Russia.

It was Brennan who initially collected unofficial foreign intelligence on the Trump campaign and funneled it to the FBI, thereby effectively instigating the FBI’s counterintelligence investigation. He also spread the unproven allegations to members of Congress, and his Intelligence Community assessment, which he prepared in the fall of 2016, was publicly used to promote the Russia-collusion narrative throughout 2017.

What Is Open Source Works?

Founded in 2007 by the CIA, OSW uses intelligence analysts to draw on publicly available information to produce intelligence products.

There appears to be some public confusion around OSW, which differs from the more commonly known Open Source Enterprise.

Although Open Source Enterprise is managed by the CIA, it’s formally a component of the Office of the Director of National Intelligence.

The origins of Open Source Enterprise began through the creation of the Foreign Broadcast Monitoring Service (FBMS), which was established in 1941 for the purpose of handling the analysis of foreign documents. In 1947, FBMS joined with the newly created CIA and became the Foreign Broadcast Information System (FBIS).

In 2005, the FBIS became the Open Source Center and, in 2015, once again changed its name to the Open Source Enterprise, when it became part of the CIA’s newly created Directorate of Digital Innovation. This sequence of names is validated in a Dec. 7, 2016, CIA press release:

“Though the office has had different names over the years—FBMS, FBIS, OSC (Open Source Center), and now OSE—75 years later, the demand for its collection and insights from its talented people around the world has never been greater.”

Open Source Works (OSW) differs from Open Source Enterprises in that it’s an internal division wholly controlled by the CIA.

OSW was created sometime in 2007, according to a website from Air University—located at Maxwell Air Force Base—which references a description of OSW obtained from Intellipedia—the Intelligence Community’s classified equivalent to Wikipedia.

A 2009 transcript of a congressional hearing with the Department of Defense makes reference to the establishment of the CIA’s OSW division:

“HLS Scholars are securing positions throughout the defense and intelligence communities, serving the Central Intelligence Agency’s Open Source Works; U.S. Central Command; the Department of State’s Foreign Service Institute; and the National Security Agency, among others.”

A 2009 CIA report describes OSW as an independent CIA unit that draws on the expertise of uncleared analysts with in-country experience and advanced, often native language skills to mine open-source information for new insights on intelligence issues.

After 2011, however, all public mentions of the CIA’s OSW cease to exist online.

The CIA, in response to a Freedom of Information Act (FOIA) request filed by historian Dr. Jeffrey Richelson—in which he requested the directive that established Open Source Works, along with its charter—wrote in a response letter on Nov. 29, 2011, the following:

The response from the CIA indicates that both the directive and charter of OSW are classified. Additionally, it appears the very existence of any records pertaining to OSW is also classified. This is somewhat surprising in that OSW, by definition, performs analysis based on open-source, unclassified material.

Steven Aftergood at the Federation of American Scientists highlighted how unusual the CIA’s denial was in a Dec. 11, 2011, article:

“Beyond that, it is an interesting question ‘why the CIA felt the need to establish such a unit given the existence of the DNI Open Source Center,’ said Dr. Richelson. The Open Source Center, the successor to the Foreign Broadcast Information Service, is the U.S. Government’s principal open source agency. It is, naturally, a publicly acknowledged organization.”

In a subsequent letter from the CIA on Dec 16, 2011, the agency states that Richelson’s FOIA request was closed “due to an administrative error.” The letter notes that “to the extent your request seeks information that is subject to the FOIA, we accept your request.”

Subsequent documents relating to the FOIA request or response haven’t been published, however, and it’s unclear whether there was ever a response from the CIA.