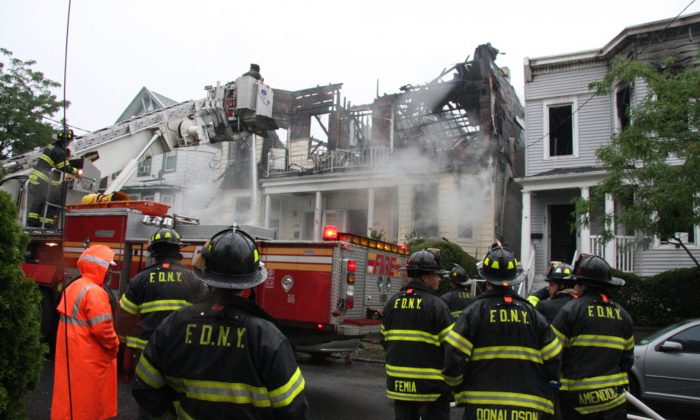 Darleen Lerzosie and Anthony Disimone saved two small children after the blaze broke out at about 1 a.m. in the backyard of their neighbor’s house in the Staten Island neighborhood of Rosebank. It rapidly escalated to a five-alarm fire by 3:45 a.m., and 200 firefighters were on the scene.

“We weren’t doing it for heroism,” Lerzosie said of her rescue of a 5-year-old neighbor from a burning building. “It was for humanity!”

Lerzosie said she was standing on her back porch when she noticed the fire. She immediately called 911 and took her fiancé, Disimone, to the front of the buildings. There they found their neighbor dangling his son from a top story window.

He was yelling, “Get my son! Get my son!” Disimone recalled. “I went underneath the window and caught him. Darleen went over and caught the daughter.”

The couple carried 3-year-old Joseph in his diaper and 5-year-old Mia in her pajamas across the street to safety. Lerzosie fell backward and momentarily dislocated her shoulder when she caught Mia. They were among 11 children who were rescued from the buildings.

At the scene New York Fire Department Deputy Chief Peter Leicht said that 11 residents and 23 firefighters were injured in the blaze.

There were a “lot of people at a lot of different windows” said Leicht. “Five separate buildings were on fire when we got here.”

“There was so much fire,” he said. “We had to rotate the ladder away from the building because we didn’t have any time to get him down.”

Leicht added that the large number of firefighters at the scene was because of the size of the fire and the number of people who needed to be rescued.

Those with injuries were sent to either Richmond University hospital or the North Campus of Staten Island University Hospital. Most people suffered minor injuries, but some were seriously injured. The FDNY would not comment on Thursday afternoon as to the status of those injured, except to say that only one firefighter was hospitalized and is expected to be released within 24 hours.

Leicht said that the firefighter suffered an electric shock from hosing the fence at the front of the buildings, which had become electrified.

“Electricity was everywhere,” he recalled. “Cables shorted out. A couple of guys got electrified.”

The cause of the fire, which was under control by 9 a.m., is still under investigation by the FDNY.

Three buildings were severely damaged, and at least five families were displaced, according to the Red Cross.