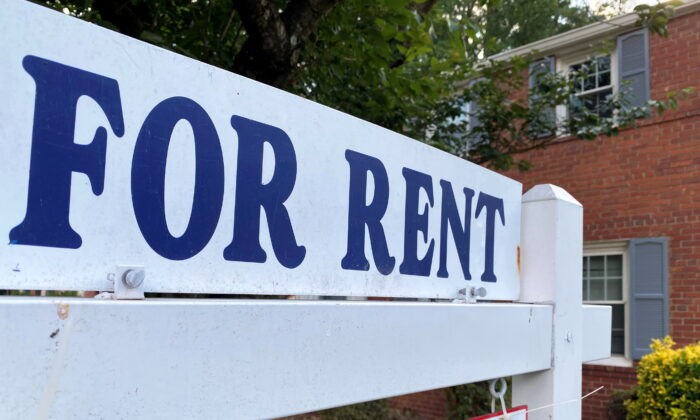 A "For Rent" sign is placed in front of a home in Arlington, Va., on June 8, 2021. (Will Dunham/File Photo/Reuters)
Inflation

Amid surging rental prices, nearly 30 percent of Americans born in the late 1990s and early 2000s still live at home with their parents or relatives, according to a new survey.

It found that 29 percent of those surveyed who are in the Gen Z age range—between 18 and 25—are living at home with parents or other relatives, and described this as a long-term housing solution as the cost of living across the country soars.

Another 27 percent said they live with a romantic partner, and just 13 percent live in a household with one or more roommates.

The survey comes as rental prices across the country have surged amid increased inflation, particularly in big cities like New York and Los Angeles, leaving many of those in the younger generation forced to reassess their living circumstances and tighten their belts.

June’s inflation figures showed that the rent index rose 0.8 percent over the month, the largest monthly increase since April 1986.

Overall, 61 percent of those surveyed said they have a household income of $50,000 or less.

However, the average monthly housing cost for those surveyed was around $1,060, lower than the national average of $1,295.

A separate report by Zumper National, in June, found that U.S. rental prices are beginning to decline across several American cities this summer following an upward trend this past year.

Still, with the 12-month Consumer Price Index (CPI) hitting 9.1 percent in June (pdf), “zoomers” (as the Gen Z cohort is called) are still left unable to put aside much in terms of savings, according to the study, which found that 28 percent of respondents are not able to save right now.

More than half of those who are unable to save money said that this is due to inflation, while 47 percent said this is because they are not earning enough and 40 percent said that inflation is outpacing their earned income.

“Right now, many zoomers, especially recent graduates, are attempting to make their first real transition into adulthood. For some that includes starting their first job or moving to a new city and for others that means simply moving out of their family home,” said Colleen McCreary, consumer financial advocate at Credit Karma.

McCreary added that these milestones are being hampered by increased costs and the current volatile economy, which she said is “making it harder than ever for young people to become financially independent.”

While the White House has admitted that inflation is “unacceptably high,” Biden administration officials are still optimistic that an impending recession is not on the horizon.

White House economic adviser Jared Bernstein, on Sunday, pointed to strong consumer spending, which he said is bolstering the economy.

However, the latest survey published by Credit Karma showed that 40 percent of Gen Z respondents are relying on credit cards and other forms of credit to pay for their purchases due to increased inflation.