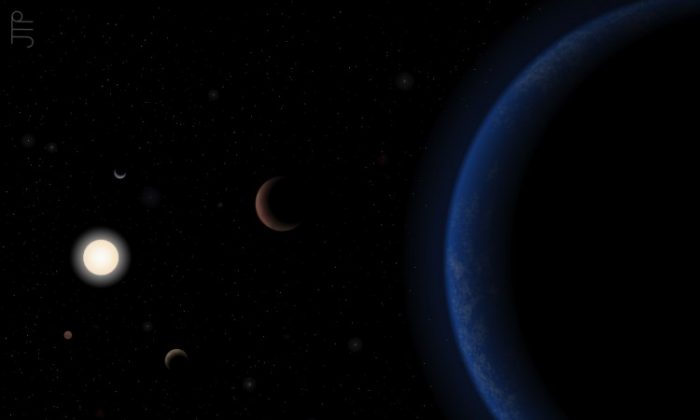 Artist's impression of Tau Ceti and its five planets. (University of Hertfordshire)
Science

Tau Ceti, one of our closest sun-like stars, has a planetary system, including a world in the habitable zone.

Just under 12 light-years away, Tau Ceti can be seen in the evening sky. So far five planets have been discovered with approximate masses from two to six times that of Earth.

With a mass five times that of Earth, the exoplanet in the habitable zone is the smallest known such planet of any sun-like star.

“Tau Ceti is one of our nearest cosmic neighbors and so bright that we may be able to study the atmospheres of these planets in the not too distant future,” said study co-author James Jenkins at the Universidad de Chile in the release.

“Planetary systems found around nearby stars close to our sun indicate that these systems are common in our Milky Way galaxy.”

Finding planets around such close sun-like stars is useful as they are easier to study in depth and thus draw conclusions about other systems.

“We are now beginning to understand that Nature seems to overwhelmingly prefer systems that have multiple planets with orbits of less than 100 days,” said study co-author Steve Vogt at the University of California-Santa Cruz in the release. “This is quite unlike our own solar system where there is nothing with an orbit inside that of Mercury.

“So our solar system is, in some sense, a bit of a freak and not the most typical kind of system that Nature cooks up.”